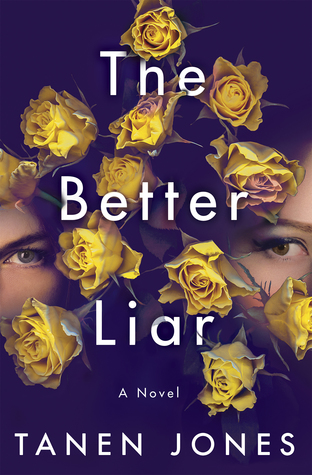 I received a copy of The Better Liar through NetGalley in exchange for a fair and honest review.

The Better Liar is the debut novel of Tanen Jones, a new thriller author throwing her writing into the mix. She’s already proven to be an author worth keeping an eye on. Her first novel touches upon sisterhood, betrayal, obligations, and so much more.

Leslie’s little sister, Robin, is dead. That simple statement should be a devastating one. But in this twisted family, that statement carries with it a whole different sort of weight. Now, Leslie is put into a position where she must consider the unthinkable; asking a stranger to pretend to be her sister.

“But it wouldn’t matter. Either way, I couldn’t get what I needed from her.

She would have loved that.”

Warnings: The Better Liar is not a novel too afraid to touch on some very intense subjects. There are themes involving drug abuse, postpartum depression and other mental health concerns, as well as suicide and suicidal thoughts.

The Better Liar was one of those novels that immediately caught my attention. The core concept was a fascinating one, and Tanen Jones’ writing style was exceptional at times. It was hard to look away from this one.

While I enjoyed The Better Liar on the whole, I will confess that it wasn’t one of my favorites. There’s a boatload of potential here though, so I want to give credit where credit is due. I loved Jones’ writing and character development. And her sense of mystery and intrigue is divine.

There are some problems I had with this book. Mainly with the reliance on specific tropes that I personally couldn’t overlook. Admittedly that may just be a ‘me’ thing, but I think anybody with a stronger background in psychology might find a point or two more than they can easily overlook.

What it comes down to is this; I loved the writing. I was less sold on the plot, towards the end. There were elements that simply made me uncomfortable. Not so much because they existed, but their portrayal of them. Perhaps that is just my bias showing through here.

One thing I would like to point out, however. When some of my now-favorite thriller authors released their first book, I found myself underwhelmed by them as well. But I knew right away that the authors were still worth watching – and I ended up being right (as far as I’m concerned, at least). I feel that way here as well. And thus I’m going to be keeping an eye on what else Tanen Jones comes up with, and I very much hope to see her writing and plots improve with time and experience.

I am an avid animal lover, photographer, reader, and much more. While my photography blog is feeling a bit neglected at the moment, the other sites I'm involved in are going strong. ✧I review books, comics, and basically anything else in the literary world over at Quirky Cat's Fat Stacks (of Books). ✧I review comics and books, as well as write content for Word of the Nerd. ✧I review comics for Monkeys Fighting Robots. ✧I write content for Screen Rant and CBR. ✧I write book reviews for The Review Crew.
View all posts by Liz (AKA Cat) →
This entry was posted in ARC, Fiction, Thriller and tagged Advanced Reading Copy, Advanced Review Copy, ARC, ARC Review, Bellantine, Book, Book Review, Books, Fiction, Literature, Net Galley, NetGalley, Review, Tanen Jones, The Better Liar, The Better Liar by Tanen Jones, Thriller, Thriller Review. Bookmark the permalink.