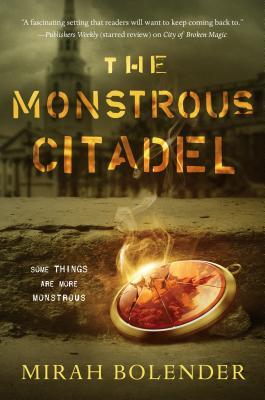 I received a copy of The Monstrous Citadel through NetGalley in exchange for a fair and honest review.

The Monstrous Citadel is the second novel in the Chronicles of Amicae series by Mirah Bolender. And I honestly can’t think of a series that has captivated me more through its fascinating world and set of characters.

Amicae is a city full of hubris, and it was nearly their downfall. In a world where infestations are commonplace, they believed themselves to be above it all. Until they were proven just how painfully wrong they were.

That was months ago. Now Laura and Okane are left to pick up the pieces and clean up the city. Following the events o the major disaster, you’d think that it would be easier to get aid from the city. But when it comes to politics, nothing is ever as easy as it seems.

Worse, there’s more than one city on the move with their political scheme. And while our beloved Sweepers are down a member, it seems like there are more players on the field than ever before.

“The friendly city of Amicae descended into chaos following a massive infestation. Amicae has long believed that infestations cannot penetrate their city walls, but these delusions were rudely swept away on November 5th by a damaged Put and ensuing swarm.”

I’ve been looking forward to The Monstrous Citadel from the moment I read the last page of City of Broken Magic. This was a series that got into my brain and wouldn’t let go. So, naturally, my expectations for this novel were quite high. How did it fair, in comparison? It blew my expectations out of the water.

The Monstrous Citadel is a whirlwind of a read – it’s fast-paced and full of surprising turns and twists. Mirah Bolender added a whole bunch of new elements to her second novel in the series, and it further enhanced the world I’ve come to love reading about.

Adding a few more layers of politics was a brilliant call. Suddenly we’re seeing more of the other cities and their desires, plus the people they tend to create. And let’s not forget about the mobsters. Because for a moment there, I nearly did. I shouldn’t have been surprised by their activities, given their large presence in the end of City of Broken Magic. I’m glad that Bolender didn’t let that subplot drop. That she is, in fact, building it up even further.

As for the main characters in this novel? I’ve always adored Laura. She’s passionate and confident in ways that she won’t ever give herself credit for. And it’s been a blast reading about her escapades. While I am still mourning what happened to Clae, I found myself falling in love with Okane in this book. Before he was an interesting side character. But over the course of this novel, he became something more, and I’m actively looking forward to seeing more of his story.

So, once again I’m finding myself in a particular situation. I loved The Monstrous Citadel, and want nothing more but to continue reading. But the book is over. So now I have to wait for news on the next novel in the series – and I’ll take any little scrap at this point!

I am an avid animal lover, photographer, reader, and much more. While my photography blog is feeling a bit neglected at the moment, the other sites I'm involved in are going strong. ✧I review books, comics, and basically anything else in the literary world over at Quirky Cat's Fat Stacks (of Books). ✧I review comics and books, as well as write content for Word of the Nerd. ✧I review comics for Monkeys Fighting Robots. ✧I write content for Screen Rant and CBR. ✧I write book reviews for The Review Crew.
View all posts by Liz (AKA Cat) →
This entry was posted in ARC, Fantasy, Uncategorized and tagged ARC, ARC Review, Book, Book Review, Books, Chronicles of Amicae #2, Fantasy, Fantasy Novel, Fantasy review, Fiction, Literature, Mirah Bolender, Net Galley, NetGalley, Review, The Monstrous Citadel, The Monstrous Citadel by Mirah Bolender, Tor, Tor Books, Tor Publishing. Bookmark the permalink.