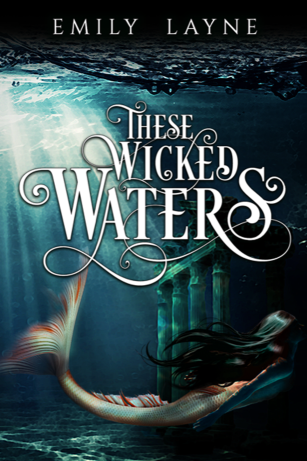 I received a copy of These Wicked Waters through NetGalley in exchange for a fair and honest review.

These Wicked Waters is the debut novel of Emily Layne, and it takes a unique look at the classic tale of mermaids and sirens. Viaii Nisi, is an isolated island surrounded by mermaids – and a curse. It turns out that when you anger the beauties of the sea, they’ll never forgive.

The Mayfield Villa resort has been established on this cursed island. Even though the owner had reason to have a concern about the location, they buried it all under the rug. And that can only lead to one thing: disaster. It’s only a matter of time before the angry mermaids rise up once again.

Annie Mayfield is the daughter of the woman who owns the resort. Unlike her mother, she’s willing to listen to the signs all over the island. And she believes in mermaids – especially after one of them saves her. But can she get everyone else to believe, before it’s too late?

Lorelei is not the sort of mermaid you might be expecting. She has long since lost her ability to sing, and thus enchant humans. She’s also got another unique feature – her twin fins. Where her sisters and queen soak in hatred, Lorelei is willing to look to the humans for something other than blood and violence.

“You might not want to advertise this,’ I said, holding it up for her to see, a final jab. ‘Viaii Nisi basically means violent isle in Greek.”

These Wicked Waters was one of those novels that immediately caught my attention. The cover was striking, and the description compelling. And honestly? I actually think the novel was even better than the description made it sound.

I know that there have been a ton of mermaid novels coming out lately, and I’m certainly not complaining about that fact. I’ve actually been digging it. That being said, I love how These Wicked Waters had such a unique take on it.

This novel is told in two main perspectives, Annie and Lorelei. Annie’s story is set firmly in the present, while all of Lorelei’s tale is from the past. It did take me a moment or two to figure out the timelines, but once I did it all clicked into place. And became so much more fascinating.

It didn’t take long before it became clear that Annie – and everyone else on the island – was in over their heads. But at least Annie was willing to admit what her own eyes were telling her – that mermaids are real.

There were some parts of her struggle that were predictable, of course. But that didn’t reduce the enjoyment in seeing them unfold. Likewise, there were plenty of twists in this story, making it as unique as it was interesting.

Lorelei was a fascinating character, and seeing her story unfold alongside Annie’s gave us a different perspective on the truth of the island. And it was so much darker than I expected. I absolutely loved every minute of her tale.

This novel is very clearly the first in a new series, as Annie’s tale has only just begun. Honestly, I’m not entirely sure how I feel about the final revelations surrounding Annie’s character. It has the potential to be interesting. But it also felt a little bit heavy handed. Perhaps if it had been revealed at the beginning of the next novel, I wouldn’t have felt that way. I’m not sure. But are far as complaints go, that’s actually a relatively minor one. So I’m pretty happy with this book on the whole.

I am looking forward to seeing more of Annie and Lorelei, and finding out how their paths will cross again. I guess I’ll just have to be patient in order to see what happens next.

I am an avid animal lover, photographer, reader, and much more. While my photography blog is feeling a bit neglected at the moment, the other sites I'm involved in are going strong. ✧I review books, comics, and basically anything else in the literary world over at Quirky Cat's Fat Stacks (of Books). ✧I review comics and books, as well as write content for Word of the Nerd. ✧I review comics for Monkeys Fighting Robots. ✧I write content for Screen Rant and CBR. ✧I write book reviews for The Review Crew.
View all posts by Liz (AKA Cat) →
This entry was posted in ARC, Fantasy, Uncategorized and tagged ARC, ARC Review, Book, Book Review, Books, Emily Layne, Fantasy, Fantasy Novel, Fantasy review, Fiction, Literature, Mermaid, Net Galley, NetGalley, Owl Hollow Press, Review, Sirens, These Wicked Waters, These Wicked Waters by Emily Layne. Bookmark the permalink.

2 Responses to Review: These Wicked Waters by Emily Layne