Review: One by One by Ruth Ware 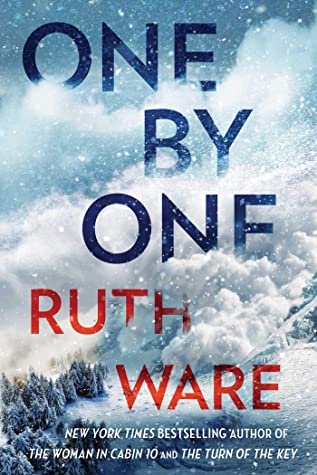 I received a copy of One by One in exchange for a fair and honest review.

Picture Ruth Ware with a heavy influence from Agatha Christie, and you’ll have an idea of what is in store for you in One by One. The latest Ruth Ware novel is a divergence from her previous books, but not in a bad way.

An isolated and high end ski resort might just sound like heaven. To a small tech company, it certainly did. That is, until a storm trapped them up there. With no way out, and no way to get help, they suddenly found their numbers dropping.

Fans of Agatha Christie really will see her influence here. Not just in the title (though there is that), but in the writing and plot as well. Throw in the concept of isolation, and suddenly this plot is hitting harder than normal (courtesy of the pandemic and social distancing).

One by One was such an absorbing read. It wasn’t quite what I expected, being very different from Ruth Ware’s other works. Still, I expected the Agatha Christie twists (kind of hard not to, with that title!). Even with all of that in mind, I was still pleasantly surprised by what I found here.

There are multiple angles of this book worth discussing, as well. There’s the whole Snoop thing – the tech company that gets stranded. It was kind of a fun idea, and I love that the influence from their app is shown at the beginning of every chapter. It’s a nice touch.

Then there are the characters themselves, of which there are several to get to know. Only two of them offer main perspectives for this tale though, resulting in us knowing them better than the rest. Still, it’s hard not to pic favorites. I know I did.

Liz and Erin are about as different as possible. Erin is one of two employees running the chalet, and she has a secret past. Plus she’s calm, confident, and knows how to handle emergencies. Liz, on the other hand, is an ex-employee of Snoop, yet is somehow still along for this ride. She’s as nervous as a rabbit in a fox den, and it takes time to understand why.

Together these two characters provided a world of insight, both to what was happening, and to the characters surrounding them. I personally loved how different they were, and how well their chapters played off against one another.

One of the things I really did love about Ware’s writing here is how carefully she doled out hints of the past. We’re never given these large chunks of information, instead we’re left to sort of piece it together as we go. It was the perfect balance to keep interest going.

I’ll confess that I did sort of predict the ending, which I’m okay with, even while being a bit disappointed. I was hoping that it would turn out differently. You guys know how much I love a surprise! But it did make sense, in the end, and that is just as important to me.

One by One was an overall enjoyable read – one that I was thrilled to have gotten my hands on early. I’m not sure I would have pegged it as a Ruth Ware novel, had you handed it to me without an author on it, but I enjoyed it nonetheless. It’s been quite the experience, watching Ruth Ware grow as a writer, and it’s sometime I intend to continue with for as long as she keeps writing books.

I am an avid animal lover, photographer, reader, and much more. While my photography blog is feeling a bit neglected at the moment, the other sites I'm involved in are going strong. ✧I review books, comics, and basically anything else in the literary world over at Quirky Cat's Fat Stacks (of Books). ✧I review comics and books, as well as write content for Word of the Nerd. ✧I review comics for Monkeys Fighting Robots. ✧I write content for Screen Rant and CBR. ✧I write book reviews for The Review Crew.
View all posts by Liz (AKA Cat) →
This entry was posted in ARC, Thriller, Uncategorized and tagged Agatha Christie, Book, Book Review, Books, Fiction, Goodreads, Goodreads Giveaways, Literature, One By One, One by One by Ruth Ware, Review, Ruth Ware, Scout Press, Thriller, Thriller Review. Bookmark the permalink.