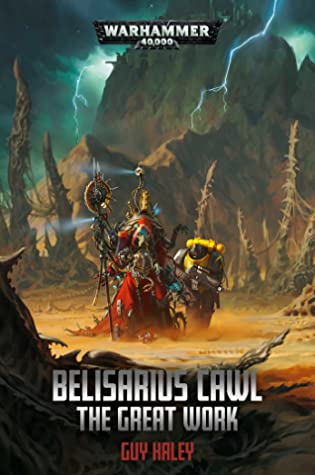 I received a copy of Belisarius Cawl through NetGalley in exchange for a fair and honest review.

Warhammer 40,000 has countless novels at this point, providing insight into some of our favorite characters. Now, it’s time for Belisarius Cawl to get his own novel. That’s probably a fact that will make more than one fan scream from excitement, right?

Written by Guy Haley, Belisarius Cawl: The Great Work does a deep dive into a beloved character from the franchise. Known as the Archmagos Dominus of the Adeptus Mechanicus, he is arguably one of the most brilliant people you’ll ever meet.

Belisarius Cawl is an old soul, both figuratively and literally. He has constantly been driven to create and achieve more. A fact that has simultaneously earned him adoration and criticism. Now, he’s found yet another project worth diving into on the dead planet of Sotha.

Belisarius Cawl is a novel that weaves together stories from many different novels. While many fans might have read all of the lore reading up to this point, many newer fans might be feeling a bit intimidated. There’s no need to worry, however. Haley does a brilliant job of bringing everyone up to the same speed, all while building on the same qualities that have made this character so iconic.

“The Andarnians are gone. The last rendered down. Their world is empty. Once I inject this dose, there will be no more. I am sorry.”

Belisarius Cawl: The Great Work is an intense and intricate read. It is every bit as grand and complicated as I would have expected or hoped, given who we’re talking about here. It’s one of those novels that you can really sink your teeth into.

What surprised me about this novel had to be all of the additional elements woven into the narrative. I wasn’t expecting all of the tension, the intentional foreshadowing, for example. Nor was I expecting to laugh at points. And yet that is exactly what happened here.

It wasn’t just Belisarius Cawl’s character that I enjoyed so much, but all of the secondary and tertiary characters as well. They brought the world to life. Or more accurately, through them, Haley brought the world to life. I’m not sure I ever read a novel where the characters from this world felt so…human. Relatable. Given how grand and epic the characters from Warhammer 40,000 tend to be, that’s probably not all that surprising. But it is an impressive feat here, nonetheless.

If you’re looking for a novel that is a slight breach from the norm, then this is absolutely the novel for you to check out. It’s refreshingly honest about itself and the characters within, and frankly, I adore that.

I am an avid animal lover, photographer, graphic designer, and much more. I love to create art, and am willing to try any artistic technique at least once. I am particularly fond of artworks involving a lot of emotion and color. The purpose of my blog is for me to be open and honest with myself and the world about my attempts to grow as an artist. My other major passion is reading. My TBR pile is larger than I'll ever be able to read, and yet I can't resist adding to it on a nearly daily basis. I love to read science fiction & fantasy, graphic novels, and pretty much anything I can get my hands on. I have a couple of blogs, as you can see. One is primarily my photography, while the other are my book reviews. If you have any questions, feel free to reach out!
View all posts by Liz (AKA Cat) →
This entry was posted in Fantasy, Science Fiction, Uncategorized and tagged Belisarius Cawl: The Great Work, Belisarius Cawl: The Great Work by Guy Haley, Black Library, Book, Book Review, Books, Fantasy, Fantasy review, Fiction, Games Workshop, Guy Haley, Literature, Net Galley, NetGalley, Review, Science Fiction, Science Fiction Review, Warhammer, Warhammer 40k. Bookmark the permalink.