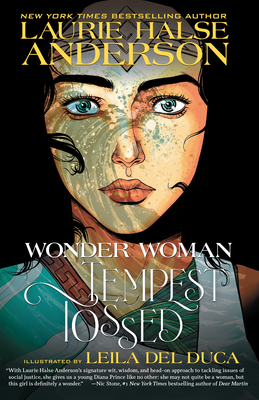 I received a copy of Wonder Woman: Tempest Tossed in exchange for a fair and honest review.

Wonder Woman: Tempest Tossed is the latest DC Graphic Novel focused on reaching a younger audience. Once again we’re diving back into the life of Diana and her life on Themyscira. But this is a tale like you’ve never seen before.

This may be another origin story, but this one feels so fresh and alive. It’s Diana’s tale told through new eyes and perspectives, with the intention of reaching a new audience.

Diana, as you all know, is the Princess of Themyscira. She was the only child on this island of warriors, and she stood out. Yet she always knew that she was destined to do more. More than her current limits would allow, certainly.

Given this is Wonder Woman we’re talking about, when the moment comes for her to make the biggest decision of her life, she doesn’t hesitate. Before she even knows what’s happening, she’s in the water saving the humans around her.

A moment that changed her life forever. Now, Diana must adjust to the world of the humans. It is nothing like she was led to believe. And yet, there is room for her to make a home for herself here.

Wonder Woman: Tempest Tossed was a delightful and enthralling read, from start to finish. I know that it may be tempting to turn away from another Wonder Woman origin story, but I encourage you all to give this one a try.

This tale blends origin story with a coming of age tale to perfection. Here Diana struggles in ways that I’ve never really seen before, and it made her feel even more human than ever. Which may be a bit ironic, all things considered.

Tempest Tossed was written by Laurie Halese Anderson. I’m really hoping that name rings a bell for you. She’s the author behind Speak and Shout – and as far as I’m concerned, seeing her writing for one of my favorite comic characters is like a dream come true.

Meanwhile, Leila del Duca was behind the artwork for Tempest Tossed, and she did an absolutely amazing job here. She’s been behind some of my favorite series, most notable Scarlet Witch, so I’m not surprised that she did an awesome job here.

What I loved the most about this graphic novel is that it really captured modern-day plights. Yes, there is war. There’s always war, and thus always somebody that needs Wonder Woman. But that’s not the only reason the world needs her, as this series did an excellent job of portraying.

Realistically, I know that this is a standalone graphic novel, but part of me really wishes that it would become a series. I’d love to see this version of Diana continue moving on in her journey. It’d be fascinating to see more of her daily struggles, as well as the battles she fights outside of war, so to speak.

I am an avid animal lover, photographer, graphic designer, and much more. I love to create art, and am willing to try any artistic technique at least once. I am particularly fond of artworks involving a lot of emotion and color. The purpose of my blog is for me to be open and honest with myself and the world about my attempts to grow as an artist. My other major passion is reading. My TBR pile is larger than I'll ever be able to read, and yet I can't resist adding to it on a nearly daily basis. I love to read science fiction & fantasy, graphic novels, and pretty much anything I can get my hands on. I have a couple of blogs, as you can see. One is primarily my photography, while the other are my book reviews. If you have any questions, feel free to reach out!
View all posts by Liz (AKA Cat) →
This entry was posted in ARC, Comics, DC Comics, Uncategorized and tagged Advanced Reading Copy, Advanced Review Copy, ARC, ARC Review, Book, Book Review, Books, Comic, Comic Books, Comic Review, DC Comics, Fiction, Graphic Novels, Laurie Halse Anderson, Leila del Duca, Literature, Net Galley, NetGalley, Review, Tempest Tossed, Wonder Woman, Wonder Woman: Tempest Tossed. Bookmark the permalink.