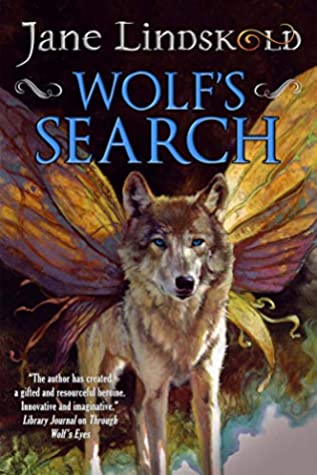 Oh my god. Can it be? After all of these years, is there another Firekeeper novel?!? I was so unbelievably excited to wake up one morning and learn about this! I didn’t even know it was coming out. Just boom! On my recommended reads list for the day. Holy cow! I’m so glad I didn’t miss out.

Wolf’s Search is the seventh novel in the Firekeeper Saga, and while I wasn’t expecting another novel in the series, I’m certainly not going to complain! It actually seems like the series will be going forward beyond this book as well, so I am extremely happy right now.

To give context to my excitement about this release: I’m fairly certain the last novel to release in this world was back in 2007. Think about that for a minute. I had gone through all of the stages of grief with this series, all the way to acceptance. And now there’s more!

Wolf’s Search, as the name may give away, follows Blind Seer on his quest to learn magic. Well, magic without the use of blood, that is. Many a fan has appreciated Blind Seer’s insistence on this particular matter, even if it may be common practice in the world these days.

You may have noticed that there are a lot of reviews talking about how this book is too short. It’s actually 300 pages long, but us fans have gotten quite spoiled with Jane Lindskold’s longer form storytelling. That and this novel is only half the tale (no pun intended). If I ever had any doubt about the continuation of the series, it was gone by the end of this book.

I don’t honestly know when the next novel will be out, or what the title will be. But I do hope we can get some news soon. And that perhaps the gap will be just a touch smaller the next time around. I’m saying that mostly because I don’t want to lose this world again.

Warnings: There is an animal death that occurs in this novel. That being said, just keep reading. Trust me on this one.

Wolf’s Search is one of the most unexpected surprises of the year. What a treat for fans! This novel perfectly matched the tone and telling of the past novels, even after all of these years. I had forgotten how much I loved Blind Seer and Firekeeper.

As mentioned above, this novel is the quest to teach Blind Seer non-blood based magic. This journey took them to a new land, one that shouldn’t have been as surprising as it was. I’m curious to learn more about these people and their magic.

Naturally, the quest itself isn’t that simple. Nothing ever is, especially when it comes to magic. Yet Blind Seer is a patient beast, and knows that it will be worth it for him in the long run.

Have I mentioned how delightful it was to see all of these characters again? But especially Blind Seer and Firekeeper. I had forgotten about their unique ways of communicating, not just with each other, but with the world.

The perspective shifts in Wolf’s Search were very well done. It allowed us to get to know different characters a bit more – while also telling us different sides of the same story. And as always, it’s interesting to see Blind Seer and Firekeeper from another’s eyes.

I didn’t mind that this novel was shorter than the others – because I have hopes that it means the next novel will be out sooner rather than later. My only comment on the matter is that the ending for Wolf’s Search did feel slightly abrupt. On the bright side, there’s no way a series would end on that note…so at least we know that there will be more.

I am an avid animal lover, photographer, reader, and much more. While my photography blog is feeling a bit neglected at the moment, the other sites I'm involved in are going strong. ✧I review books, comics, and basically anything else in the literary world over at Quirky Cat's Fat Stacks (of Books). ✧I review comics and books, as well as write content for Word of the Nerd. ✧I review comics for Monkeys Fighting Robots. ✧I write content for Screen Rant and CBR. ✧I write book reviews for The Review Crew.
View all posts by Liz (AKA Cat) →
This entry was posted in Fantasy, Uncategorized and tagged Book, Book Review, Books, Fantasy, Fantasy Novel, Fantasy review, Fiction, Jane Lindskold, Literature, Obsidian Tiger Books, Review, Wolf’s Search, Wolf’s Search by Jane Lindskold. Bookmark the permalink.