Review: The Only Good Indians by Stephen Graham Jones 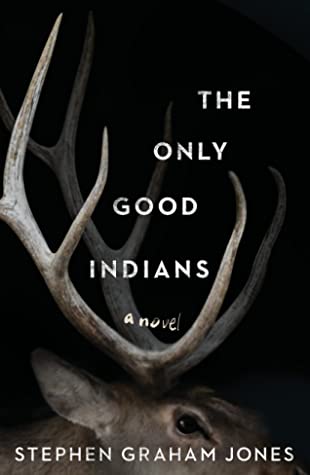 I received a copy of The Only Good Indians through BookishFirst in exchange for a fair and honest review.

The Only Good Indians is the latest horror novel to come out of the mind of Stephen Graham Jones, and it is a truly chilling (and graphic) tale worth reading. If you’re looking for a novel that terrifies as it unfolds, then you’re going to want to check this one out.

This is a novel that blends concepts of horror (revenge, hunting, the unknown) with cultural identity, messages of import, and so much more. That makes The Only Good Indians stand out amongst the rest of the horror novels I’ve read in recent times.

Four men are haunted by one horrible mistake they made when they were younger. Unfortunately, they’re not the only ones haunted by what was done. For the victim has come back to wreak revenge on them, and no one is safe.

“The best jokes are the ones that have a kind of message to them. A warning.”

Warnings: There is a lot of graphic imagery to be found in The Only Good Indians. We’re talking graphic death scenes, violence, gore, and more. There are also several detailed depictions of animal deaths, from domestic pets to hunted animals. It was a lot for me to take in, and as such, I had to take dozens of breaks while reading this one. So consider yourself warned.

The Only Good Indians is arguably the most disturbing novel I’ve read this year. And I honestly mean that in the best ways possible. It was dark, chilling, and unfolded in such an elegant and compelling manner.

I mentioned in my warning that there were a lot of heavier scenes in this novel, including lots of graphic depictions. I’m bringing it up again here, to emphasize a point. Some of these scenes really were dark and alarming. Had the writing not been so fantastic, I would have walked away from this book without a second glance.

But I didn’t. I kept coming back…because I had to see what happened next. That’s how addictive and compelling the writing was. I was willing to put myself through those scenes – again and again – in order to see it through to the end.

If that isn’t the perfect example of a horror novel experience, then I don’t know what is. All I can say is that this book really got to me. It had all of those terrifying tones, and then some. The writing carried the plot so much farther though, because of the way Stephen Graham Jones unveiled the truth.

There was something powerful in the way the plot was revealed. In the hunt. It was chilling, obviously. But it also struck a chord. I find that to be all the more disturbing, while also being oddly beautiful.

Another brilliant feature of this novel? The perspectives. The decision to introduce us to several different characters over the course of this tale was an interesting choice. Yet it paid off, especially towards the end. I honestly don’t think it could have been the same story without the method in which it was told.

All things considered, The Only Good Indians was quite the reading experience. If you’re looking for a novel that breaks all expectations, while telling a terrifying tale full of impact, then this is the novel for you.

I am an avid animal lover, photographer, reader, and much more. While my photography blog is feeling a bit neglected at the moment, the other sites I'm involved in are going strong. ✧I review books, comics, and basically anything else in the literary world over at Quirky Cat's Fat Stacks (of Books). ✧I review comics and books, as well as write content for Word of the Nerd. ✧I review comics for Monkeys Fighting Robots. ✧I write content for Screen Rant and CBR. ✧I write book reviews for The Review Crew.
View all posts by Liz (AKA Cat) →
This entry was posted in ARC, Fantasy, Horror, Uncategorized and tagged Advanced Reading Copy, Advanced Review Copy, ARC, ARC Review, Book, Book Review, Bookish First, BookishFirst, Books, Fantasy, Fiction, Gallery, Gallery/Saga Press, Horror, Horror Review, Literature, Review, Saga Press, Stephen Graham Jones, The Only Good Indians, The Only Good Indians by Stephen Graham Jones. Bookmark the permalink.

2 Responses to Review: The Only Good Indians by Stephen Graham Jones