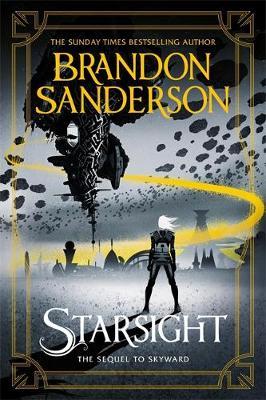 Starsight is the second novel in Brandon Sanderson’s Skyward series, and it is as dramatic and full of chaos as ever. I don’t think Spensa knows how to keep still – or how to keep herself out of trouble, for that matter.

All Spensa ever wanted was the chance to be a pilot. Now, she’s finally gotten that chance. More than that, she has quickly made herself essential to her people, thanks to her talent and unique ability set.

Being a hero comes with responsibilities. And risks. Thankfully, Spensa is not the type to scare away from any challenge. So she’s ready to set off on her next big adventure, especially if it gives her even the slightest chance to free her people from the planet they’ve been imprisoned on.

“A hero doesn’t choose her trials.”

Skud! Starsight was such a great and enjoyable read. Everything about Spensa is entertaining. Especially her mannerisms and way of speaking (seriously, I think I need to add ‘skud’ into my rotation). This is a novel I was insanely excited for.

So excited, in fact, that I completely spaced on writing a review for it. Whoops. Have you ever done that? Gotten so wrapped up in a novel that you just assumed that the world already knew how you felt about it, because they must have experienced the same thing? That’s sort of what happened here. That and I’m a space case sometimes, when it comes to remembering things.

“My name is Spena. You said you were waiting to hold out your hand to a human, in peace. Well…here I am.”

Not only was Starsight a fascinating read – one that gave us an opportunity to see more of the greater universe in this series – but it was also a novel full of quotes. I had trouble picking just one quote that I loved here, and had to settle for two (I could have easily gone with more). So if you’re looking for a book with memorable statements…take a peek at this one.

The pacing was fast, with Spensa getting shot around all over the place. It sort of fits her personality, when you think of it. As I mentioned above, she’s not exactly the type to stay still. Or pick the calm or quiet path in love.

The secondary characters in this novel were fascinating. I honestly couldn’t learn enough about them, and really hope that we’ll be seeing them again in the next novel. They were clever and interesting, showing off a variety of different species, personalities, and histories.

The more I see the antagonists of this series (both on the smaller and larger scale of things), the more fascinated I find myself with them. On the one hand, we have these large beings that nobody seems to really know or understand. And on the other hand, we have highly political creatures who, at their core, are alarmingly xenophobic (despite their claims to the contrary). Seeing the different dilemmas both create has been fascinating.

Starsight was not at all what I was expecting from the sequel to Skyward. But in some ways, I think it actually ended up being ever better than I was expecting or hoping. There’s no doubt that even more complexity was added, and I think that’ll carry the series even further.

I know that there is going to be at least two more books in the series, though they don’t yet have titles (that I’m aware of). I honestly can’t wait to hear any and all news about them though, because I have no doubt that they’ll hold up.

I am an avid animal lover, photographer, graphic designer, and much more. I love to create art, and am willing to try any artistic technique at least once. I am particularly fond of artworks involving a lot of emotion and color. The purpose of my blog is for me to be open and honest with myself and the world about my attempts to grow as an artist. My other major passion is reading. My TBR pile is larger than I'll ever be able to read, and yet I can't resist adding to it on a nearly daily basis. I love to read science fiction & fantasy, graphic novels, and pretty much anything I can get my hands on. I have a couple of blogs, as you can see. One is primarily my photography, while the other are my book reviews. If you have any questions, feel free to reach out!
View all posts by Liz (AKA Cat) →
This entry was posted in Fantasy, Science Fiction, Uncategorized and tagged Book, Book Review, Books, Brandon Sanderson, Fantasy, Fantasy Novel, Fantasy review, Fiction, Literature, Orion Publishing Co, Review, Science Fiction, Science Fiction Review, Skyward, Skyward #2, Starsight, Starsight by Brandon Sanderson. Bookmark the permalink.