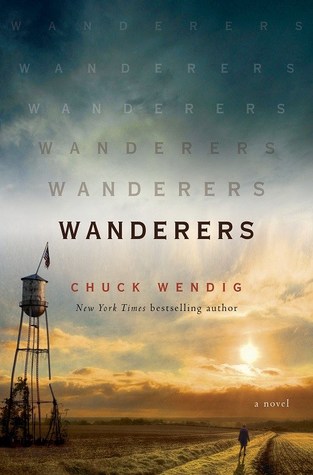 I received a copy of Wanderers through NetGalley in exchange for a fair and honest review.

Wanderers is the latest novel by Chuck Wendig, and it’s been getting a lot of attention. Before the novel was even out people were fighting over the rights to adapt the novel into a series. Which is pretty huge (QC Entertainment won the rights, for those that are curious). And honestly, this novel will adapt well to a series, so I’m looking forward to seeing it.

Wanderers is a post apocalyptic novel, but not quite. More like it’s a story following the dreadful spiral downward. The use of multiple perspectives helps to tell the tale, and it’s a dark and disturbing one.

It’s a survival novel, but also a study in human nature and reactions. That’s what makes it so standout amongst other novels in the same genre. It wasn’t quite like anything else I’ve read, and I mean that in the best way possible.

I’m not kidding when I call this novel dark, but it’s also brilliantly written. Every detail held my attention, and had me eager for more. Though sometimes I was afraid to see what was going to be revealed next.

Warnings: As mentioned above, this novel can get pretty dark at times. There is a mass contagion that poses a major threat to humanity. So if you’re suffering from nosophobia, or any other variant of being afraid of disease, this is a novel you should skip. And as with many post apocalyptic novels, this novel portrays the worst side of humanity, including racism, sexism, and so much more.

The Wanderers was a thrilling and fast paced novel of epic proportions. It’s dark and disturbing, and will probably give you nightmares. But it is so absolutely worth it. If you’ve been looking for a new post apocalyptic novel to try, I’d strongly recommend this one.

There was a lot to love in this novel. The tone itself was amazing – to me it felt similar to Hot Zone, but maybe I just had that on my mind (I am rereading it next – I don’t know why I’m doing that to myself). The switches in perspective help to tell the story, while keeping the plot moving forward at a steady pace. But it also gives different levels of insight as well, all due to how different each of the characters were.

Wanderers started off at an interesting point, but it did a great job of pulling me into the narrative. Looking back on it, I can see how the introduction was an allegory for what was going to happen to the characters in Chuck Wendig’s novel.

I mentioned above that this novel is not for the faint of heart, and I do mean that. Chuck Wendig’s description of diseases and outbreaks were so detailed they felt real…which may not be the best thing for the mental state of those reading! I know I for one will likely flinch at the sound of sniffles for the next few weeks. But all of that speaks to how immersive Wanderers really is.

Mentally, I’m still working my way through the conclusion. I’m not entirely sure how I feel about it, but that’s okay. In fact, maybe it’s a good thing that it left me feeling conflicted. I love novels that make me think, so I have to appreciate this one as well.

I’m really curious to see how the adaptation of The Wanderers will go. The hardest part to get right – but also the most vital piece – will be the tone itself. Everything else will hopefully fall into place with it. No matter what, I’m sure that I’ll give the series a try. I’m not sure I could resist.

On the whole, I have to say that this is another hit from Chuck Wendig. I can’t wait to see what he comes up with next!

I am an avid animal lover, photographer, reader, and much more. While my photography blog is feeling a bit neglected at the moment, the other sites I'm involved in are going strong. ✧I review books, comics, and basically anything else in the literary world over at Quirky Cat's Fat Stacks (of Books). ✧I review comics and books, as well as write content for Word of the Nerd. ✧I review comics for Monkeys Fighting Robots. ✧I write content for Screen Rant and CBR. ✧I write book reviews for The Review Crew.
View all posts by Liz (AKA Cat) →
This entry was posted in ARC, Fiction, Science Fiction, Uncategorized and tagged Book, Book Review, Books, Chuck Wendig, Del Ray, Fiction, Literature, Net Galley, NetGalley, Post Apocolyptic, Review, Science, Science Fiction, Wanderers, Wanderers by Chuck Wendig. Bookmark the permalink.