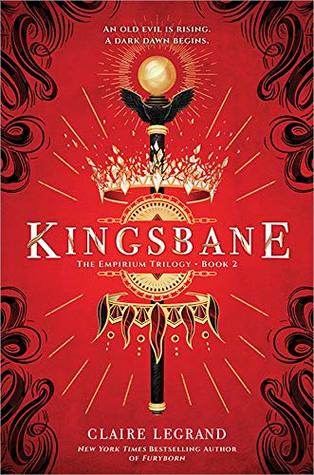 I received a copy of Kingsbane through Edelweiss in exchange for a fair and honest review.

Kingsbane is the second novel in the Empirium series by Claire Legrand. I remember when Furyborn came out last year – it was the talk of the town (er rather, book groups). I rather expect that’ll happen again with Kingsbane, and I’m really looking forward to talking with other fans about it.

Kingsbane continues the tale of Rielle and Elaine, and their epic quests. Admittedly one is more willing than the other to start something so big…but that’s hardly surprising. Both are major elements in a prophecy, one that foretold two queens. One called the Blood Queen, and the other known as the Sun Queen.

Furyborn did a brilliant job of keeping us in the dark about who was who. But Kingsbane removes all doubt. Each queen has their own purpose, as well as their own hopes and dreams. But the real question is, can they manage to balance it all?

Warnings: Much like Furyborn, Kingsbane deals with some sensitive subjects. There are abductions, graphic deaths, and a mind control element in the mix. There’s also one scene (spoiler warning) that is confusing and hard to interpret. It does raise some concerns about Rielle and consent. So consider yourself warned.

Kingsbane is the perfect continuation of the story created in Furyborn. Both queens continue their epic tale, but there are more twists and turns than ever. I think any fan that enjoyed the first novel would be happy about picking up Kingsbane.

But I will confess that I didn’t like Kingsbane quite as much as Furyborn. There were certain elements that I guess just didn’t hold up? I can see the thought structure behind some of what was done, and I understand (and even agree with) the reasoning. But I’m not sure on the whole.

I think, for me, Kingsbane is somewhere between a three and a half star rating and a four. I don’t split my ratings further than half ratings though, so Kingsbane is stuck somewhere in this limbo. Push come to shove I’d probably go with the four-star rating though, because I really enjoyed Elaine’s side of the story.

In Furyborn we saw both perspectives, one of the Blood Queen, and one of the Sun Queen. We even started off knowing that one of them was doomed to die. That structure continues in Kingsbane, which I was somewhat surprised with. But apparently, both queens still had a lot left to tell. Having finished this novel, I think the next in the series will probably continue this pattern, but I can’t be certain.

I’ll confess that I absolutely have a favorite when it comes to the two queens. I enjoyed Elaine’s side of the story so much. And while I was interested in what was happening to Rielle, it just wasn’t the same. There wasn’t as much of an emotional investment for me. Perhaps because I’ve always known her ultimate fate? (And thus I’ve been trying to protect myself this whole time?).

The twists and turns in this novel varied fairly dramatically, between the two characters. Perhaps because I’ve braced for the worst, Rielle’s twists didn’t shock or hurt me as much as I expected. Meanwhile, all the curveballs thrown Elaina’s way completely caught me off guard.

To be honest, I’m still not sure how I feel about that final revelation. The one involving Elaina (I refuse to say more than that though). If any other fans have read the book and want to reach out and talk about it, please do so! I need to talk that whole mess out before the next book comes out.

Regardless of how I feel about the final twist, I really am looking forward to the next book in the series. I don’t think it has a name yet – or if it does, I don’t know it. But I’m sure we’ll hear about it soon enough.

I am an avid animal lover, photographer, reader, and much more. While my photography blog is feeling a bit neglected at the moment, the other sites I'm involved in are going strong. ✧I review books, comics, and basically anything else in the literary world over at Quirky Cat's Fat Stacks (of Books). ✧I review comics and books, as well as write content for Word of the Nerd. ✧I review comics for Monkeys Fighting Robots. ✧I write content for Screen Rant and CBR. ✧I write book reviews for The Review Crew.
View all posts by Liz (AKA Cat) →
This entry was posted in Fantasy, Uncategorized and tagged Book, Book Review, Books, Claire Legrand, Edelweiss, Empirium, Empirium #2, Fantasy, Fantasy Novel, Fantasy review, Fiction, Kingsbane, Kingsbane (Empirium #2), Kingsbane (Empirium #2) by Claire Legrand, Literature, Review, Sourcebooks Fire. Bookmark the permalink.