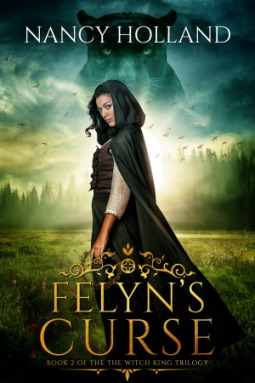 Felyn’s Curse is the second novel in Nancy Holland’s Witch King Trilogy. This is a series that combines fantasy elements with romantic subplots. So it’s perfect for anybody that’s hoping to find that blend.

Felyn has spent her whole life being cursed. Thankfully, she’s grown up in a village that accepts her for who she is – even though she tends to get a bit furry under the night sky. Now Felyn has the chance to pay back her family and maintain the peace. All she has to do is agree to a fake marriage. That doesn’t sound too bad, right?

Varz is desperate to find any military of diplomatic edge possible. Anything to keep his people safe. So when offered a chance to do all of that, he jumps on it. He’s not concerned about maintaining a quasi-marriage with a witch.

I’ll be honest here: one of the main things that caught my attention towards this series is the stunning set of covers. Seriously, go take a look at the three of them. They’re beautiful!

“The moon set too close to dawn. Felyn was forced to walk openly through the gray light as long as she could. As she neared the edge of the forest’s shelter, she saw him.”

Warnings: If you’ve read Thalgor’s Witch, then you’ve probably seen all of the graphic content this series has to offer. Felyn’s Curse has some animal death, alongside mentions of slavery, kidnapping, and things such as that. None of it happens in the first person, and in this instance, most of it is referencing the past.

Felyn’s Curse was an interesting read, all things considered. Having just finished Thalgor’s Witch (the first in the trilogy), I can safely and honestly say that I liked the two of them about the same. That is to say, I enjoyed them, but also found that there was untapped potential.

And I really do mean that: the core concept behind the Witch King Trilogy is really quite good. I’ve been desperate since book one to see more of this Witch King and the reasons behind his actions. That being said, I do feel like this book fell a little short of my hopes. It wasn’t awful, just not quite anything to write home about (and yes I appreciate the irony of my statement there).

I will say that I enjoyed Felyn’s character a lot. I think if she was in a different set of circumstances I would have liked her even more! But I just wasn’t digging the plot device that she had been thrown into. I think that’s the real crux of the problem.

I should mention that at the time of sitting down and writing this review, I’ve already read the third book in the series. And at last, I feel like I’ve been given the book I’ve been looking for! So if you’ve been reading this series, full of the same hope as me, go on and read The Witch King next.

I am an avid animal lover, photographer, graphic designer, and much more. I love to create art, and am willing to try any artistic technique at least once. I am particularly fond of artworks involving a lot of emotion and color. The purpose of my blog is for me to be open and honest with myself and the world about my attempts to grow as an artist. My other major passion is reading. My TBR pile is larger than I'll ever be able to read, and yet I can't resist adding to it on a nearly daily basis. I love to read science fiction & fantasy, graphic novels, and pretty much anything I can get my hands on. I have a couple of blogs, as you can see. One is primarily my photography, while the other are my book reviews. If you have any questions, feel free to reach out!
View all posts by Liz (AKA Cat) →
This entry was posted in Fantasy, Uncategorized and tagged Book, Book Review, Books, Fantasy, Fantasy Novel, Fantasy review, Felyn’s Curse, Felyn’s Curse by Nancy Holland, Fiction, Literature, Nancy Holland, Review, The Witch King Trilogy, The Witch King Trilogy #2. Bookmark the permalink.