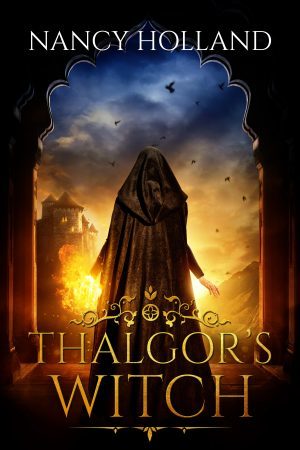 Thalgor’s Witch is the first in a new trilogy by Nancy Holland. This world blends fantasy and romance together, creating something new and different. And leaving behind a little bit of something for everyone.

Thalgor is the leader of his band of people. They’re warriors, but only because they must be. They know that there’s another option out there – and hope to one day rebuild the Kingdom they all had lost.

Erwyn is a witch, plain and simple. And she lives in a time when many tribes would fear that fact about her. So when she comes across a warrior who doesn’t fear her and is willing to trust her instincts, she knows she might be able to change her path in life.

I’ll be honest here: one of the main things that caught my attention towards this series is the stunning set of covers. Seriously, go take a look at the three of them. They’re beautiful!

“Why would you heal an enemy too weak to harm you or your child?”

Warnings: Thalgor’s Witch covers a lot of heavy subjects. Included in this novel are subjects such as kidnapping, slavery, rape (mentioned/threatened, but never shown in the first person), and abuse.

Thalgor’s Witch was an interesting read, one set in a brilliant world of magic, lore, and feuding tribes. This is not a safe time to be a witch, and that’s what made Erwyn’s plight so fascinating. This was a woman unafraid to heal her enemies, for no other reason than that her magic called for it.

I liked Erwyn right away for that reason, though her regards to other characters made it a little more difficult at times. Meanwhile, Thalgor took a bit more to get used to and to grow to like. And even in the end, I did sort of feel like his character could have used just a touch more character development. But maybe that’s just me.

As for the main plot, it was interesting. But it also wasn’t quite what I was hoping for, either. I’ve enjoyed Nancy Holland’s work in the past, and thus had decent expectations for this series. But so far I’m finding myself slightly less than thrilled. Though I do think I’ll probably continue on and read the whole series – I’m fascinated by the concept of the Witch King, and really want to see more of it.

I am an avid animal lover, photographer, reader, and much more. While my photography blog is feeling a bit neglected at the moment, the other sites I'm involved in are going strong. ✧I review books, comics, and basically anything else in the literary world over at Quirky Cat's Fat Stacks (of Books). ✧I review comics and books, as well as write content for Word of the Nerd. ✧I review comics for Monkeys Fighting Robots. ✧I write content for Screen Rant and CBR. ✧I write book reviews for The Review Crew.
View all posts by Liz (AKA Cat) →
This entry was posted in Fantasy, Uncategorized and tagged Book, Book Review, Books, Fantasy, Fantasy Novel, Fantasy review, Fiction, Literature, Nancy Holland, Review, Thalgor’s Witch, Thalgor’s Witch by Nancy Holland, The Witch King Trilogy, The Witch King Trilogy #1, Tule Publishing. Bookmark the permalink.