Review: Tales of the Peculiar by Ransom Riggs 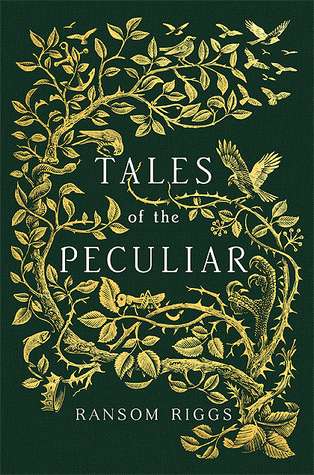 Tales of the Peculiar is a collection of short stories or lore from the world of the Peculiars. It fits into the Miss Peregrine’s Peculiar Children series, and could even be considered a prequel. Though I personally would read the first few novels first, since they add so much context to the world.

In short, these are all legends and stories told by the Peculiars of this world. Like a lot of fairy tales and legends, a lot of these stories serve to teach children a lesson. That adds to the impact, while also making them feel a bit like coming home. After all, each and every one of us grew up hearing stories such as these. Though perhaps they weren’t quite as peculiar.

In total there are ten short stories in this collection: The Splendid Cannibal, The Fork-Tongued Princess, The First Ymbryne, The Woman Who Befriended Ghosts, Cocobolo, The Pigeons of Saint Paul’s, The Girl Who Could Tame Nightmares, The Locust, The Boy Who Could Hold Back the Sea, and The Tale of Cuthbert.

“So please enjoy these Tales – before a crackling fire on a chilly night, ideally.”

Tales of the Peculiar is a fun and interesting collection of short stories written by Ransom Riggs. I’ve been looking forward to something like this ever since it was hinted at a few books ago, and it was absolutely worth the wait.

This novel will read more like a children’s storybook than anything else –and that was clearly the intent. As such, there are going to be some stories that the reader connects to more than others. I know I personally had my favorites (but I’ll try not to color your opinion here).

This children’s story is rather graphic and morbid, as it quite literally does discuss cannibals. If it is any consolation, they’re not cannibals by choice. This is also the story of a village full of peculiars, all whom can grow back their limbs. You can probably guess where this story is going to lead.

The moral behind this story is fairly obvious, though one can also argue that there are a few secondary lessons to be learned as well. It was an interesting, if somewhat graphic, story to read.

Every children’s story collection has to include a story about a princess. In this case, the princess is Peculiar. She was afraid that what made her peculiar (a forked tongue, ability to breathe fire, and scales on her back) would ruin any chance at marriage or love.

This princess had to learn some hard lessons about life and love. But in the end, she came out so much stronger for it. And we could all learn a thing or two from her journey.

This is the tale of the very first Ymbryne and how she learned to control her powers – and how it saved the Peculiar lives around her. This is a story I’ve been waiting for, and it was everything I had hoped it would be, and then some. It answered a lot of questions, though of course, one could argue that none of it is verified (being a story instead of fact).

The Woman Who Befriended Ghosts

Hildy grew up with only the company of her dead sister as a friend. As such, she has become rather fond of ghosts, and rather awkward around the living. So how exactly is she meant to make friends?

This was an interesting twist of a tale. But honestly, it fits in really well, both with this collection and with the general themes of the Peculiar Children series.

A sad tale of a boy who loses his father – only to learn one day that his father never voluntarily left him at all. And that he walks the same path as his father.

This was a sad tale. Beautiful, but sad. I’m not sure how much more to describe it, because I don’t want to spoil it all. But it will leave you feeling a complex variety of emotions.

The Pigeons of Saint Paul’s

We already know that animals can be Peculiar. But what would happen if there was a whole flock of pigeons who were? How would they find a way to compromise with the humans, assuming they even could? (Or vice versa).

This was a fun and interesting tale, though I may be biased since I adore the concept of Peculiar animals.

The Girl Who Could Tame Nightmares

Every Peculiar has spent time finding how they can be useful. And learning about the risks of their Peculiarity – including how society sees them, or even the risks of using their abilities. This example shows all of the reasons why one must be careful.

This was a dark and creepy story, and I loved it. It was interesting seeing a completely different side of Peculiarity – one that desperately wanted to be used, but came at a high cost (mostly due to a lack of understanding).

A boy who loves any and all animals is naturally going to have a tough time on a farm, especially when he can’t even bear the death of an insect. Until one day he found a way to cope.

This was both beautiful and heartbreaking. The young boy’s compassion isolated him as much as his Peculiar nature did, and it was ultimately the father who needed to learn a lesson in this tale. It was powerful to read.

The Boy Who Could Hold Back the Sea

There are some Peculiars who must be careful about showing off their abilities, for humanity will use and use them until they’re all dried up. Or blame them for every little thing that goes wrong in their lives. That goes doubly so for any who can affect the weather or natural events, such as the body who could control the tide.

This was very clearly a cautionary tale: one must always be careful about trusting strangers, especially when it comes to the secrets you keep that so easily could be used by others.

The Tale of Cuthbert.

The Tale of Cuthbert is the last story in this collection, and it is the perfect ending. He’s the giant referenced earlier in the series, and this just gives us a bit more of an idea of his life. It’s heartbreaking to read, for this was a giant willing to give up anything and everything for those he loved.

I am an avid animal lover, photographer, reader, and much more. While my photography blog is feeling a bit neglected at the moment, the other sites I'm involved in are going strong. ✧I review books, comics, and basically anything else in the literary world over at Quirky Cat's Fat Stacks (of Books). ✧I review comics and books, as well as write content for Word of the Nerd. ✧I review comics for Monkeys Fighting Robots. ✧I write content for Screen Rant and CBR. ✧I write book reviews for The Review Crew.
View all posts by Liz (AKA Cat) →
This entry was posted in Fantasy, Uncategorized and tagged Book, Book Review, Books, Dutton Books, Dutton Books For Young Readers, Fantasy, Fantasy Novel, Fantasy review, Fiction, Literature, Ransom Riggs, Review, Short story, Short Story Collection, Short story review, Tales of the Peculiar, Tales of the Peculiar by Ransom Riggs. Bookmark the permalink.