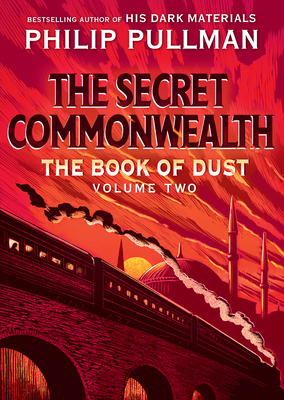 Philip Pullman’s latest trilogy, The Book of Dust is directly tied into one of his most famous series, His Dark Materials. This trilogy follows Lyra. The first novel followed her story as a baby. And now this novel, The Secret Commonwealth, follows Lyra several years after His Dark Materials concluded.

Seven years after Lyra and Will were forced to separate, Lyra is still living at Oxford. Though now she’s a student, and things are quite different from when we last saw her. Lyra likely never overcame the heartbreak of her youth, but she’s truly tuned into an academic. Earning herself that scholastic sanctuary.

But once again, there are things on the move in this world. There are forces and people who are not done with Lyra, and they’re not content to wait anymore. She’s forced to make some drastic changes in her life, but with the help of allies, she’ll find the answers she’s seeking.

“Oh, the folly of going out by himself in that way, but he wouldn’t listen, he wouldn’t stop doing it, and one day they’d both pay the price.”

Warnings: The Secret Commonwealth covers a lot of heavy subjects and tone. Lyra herself is suffering from depression, loss, and grief. Additionally, there are examples of refugees (several of whom are hurt), and a scene involving sexual assault.

I hate to say this, but I found myself feeling kind of lukewarm about The Secret Commonwealth. Don’t get me wrong, I had been looking forward to this novel for months. Okay, looking forward to and secretly dreading. But can you blame me? The end of His Dark Materials messed me up for ages, and to this day I can’t read those iconic quotes without crying. So I was expecting a bit of an emotional rollercoaster in this novel.

And I guess, in some ways, that expectations was right. There were certainly parts of The Secret Commonwealth that were heavy with emotions. I was just surprised by the direction that they took. There are few things in this series that I take for granted, but I quickly learned that I shouldn’t even assume those basic principles.

There were parts of this novel that were interesting. I found myself vastly curious about the Blue Hotel and the rose water. I want nothing more than to learn as much as possible about those parts of the story. I also adored that there were so many examples of people being good and kind, even without knowing Lyra. Those moments were touching.

But then there were other parts that felt like they dragged a bit. Or worse, there were several moments that made me cringe. (Spoiler warning) I personally hated the elements surrounding the budding relationship between Lyra and Malcolm. It’s not so much the age difference, as it is their history and their difference in status (he was her professor, after all). But maybe I’m a bit biased there, since I will never get over Will.

I’m honestly pretty disappointed that I wasn’t head over heels for this novel. I think that’s why I’m still feeling a bit unenthusiastic about it all. I was hoping to be swept away, and I wasn’t. Maybe that isn’t fair of me. I do hope that the next novel (which I don’t know if it has a name yet) will surprise me with how interesting it is. Only time will tell, I suppose.

I am an avid animal lover, photographer, reader, and much more. While my photography blog is feeling a bit neglected at the moment, the other sites I'm involved in are going strong. ✧I review books, comics, and basically anything else in the literary world over at Quirky Cat's Fat Stacks (of Books). ✧I review comics and books, as well as write content for Word of the Nerd. ✧I review comics for Monkeys Fighting Robots. ✧I write content for Screen Rant and CBR. ✧I write book reviews for The Review Crew.
View all posts by Liz (AKA Cat) →
This entry was posted in Fantasy, Uncategorized and tagged Alfred A. Knopf Books for Young Readers, Book, Book Review, Books, Fantasy, Fantasy Novel, Fantasy review, Fiction, Literature, Philip Pullman, Review, The Secret Commonwealth, The Secret Commonwealth by Philip Pullman. Bookmark the permalink.