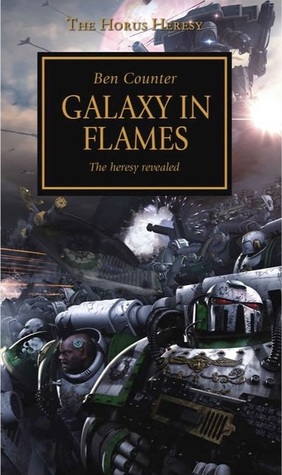 Galaxy in Flames is the third novel in the Horus Heresy saga, part of the greater world of Warhammer 40,000. This epic addition to the confrontation was written by Ben Counter, and it was utterly unafraid to show the darker side of corruption and war.

The Horus Heresy is one of the biggest events to sweep through the lore and legends – which is saying something. It’s something that any fan of the franchise – even those merely curious about the lore – would find themselves enjoying. That’s partially because they are just so well written.

Horus has fallen into corruption, though many are yet unaware of that. So what does one leader, a god among men, do when he wants to wage a war and create dramatic change in the universe? He plans. And he moves forward.

“Our names may be forgotten, and our bones crumble to dust, but our deaths will echo through the millennia to come.”

Ouch. Galaxy in Flames may just be the roughest novel in the series thus far – though I have little doubt that it’ll get worse before it gets better. We all knew that the Horus Heresy was going to get bloody. That it would pit brother against brother in a bloody battle for dominance. But that doesn’t make it any easier.

Honestly, I can’t think of a better name for this novel. Galaxy in Flames is so on point with everything that happens within these pages. This starts off a series of events. This is the start of a dramatic change about to sweep through the universe. And it is going to get bloody.

The highs and lows in this novel were profound. There were moments that were truly inspiring. Heroes standing up to do what was right, regardless of the cost. In many cases, they knew full well what the cost and odds were before they acted. And they did it anyway.

Likewise, there were heavy lows. Moments that weigh down your heart, breaking it just a little bit further. This is a war, more than that, it is a war of brothers. We know that not everyone will survive. It’s still rough to see.

This novel includes perspectives from both sides – the loyalist chapters and the traitor legions. It was insightful, getting to see how they all thought and acted. Especially in regards to their opposition. That extra insight proved to be quite useful, when seeing them act and react against one another.

Finally, the ending of this novel, while having been clearly telegraphed to all readers (or anybody that has a general understanding of the events that unfolded in the early days of the Horus Heresy), it was still very painful to see. Well written, but painful.

I’m getting close to the point where most people stop agreeing on the reading order. Next up for me is Flight of the Eisenstein (which I’ve actually already started), followed by Fulgrim. From there I’ll probably continue to go through the Goodreads recommended reading order, but I’m also open to taking suggestions.

I am an avid animal lover, photographer, reader, and much more. While my photography blog is feeling a bit neglected at the moment, the other sites I'm involved in are going strong. ✧I review books, comics, and basically anything else in the literary world over at Quirky Cat's Fat Stacks (of Books). ✧I review comics and books, as well as write content for Word of the Nerd. ✧I review comics for Monkeys Fighting Robots. ✧I write content for Screen Rant and CBR. ✧I write book reviews for The Review Crew.
View all posts by Liz (AKA Cat) →
This entry was posted in Fantasy, Uncategorized and tagged Ben Counter, Black Library, Book, Book Review, Books, Fantasy, Fantasy Novel, Fantasy review, Fiction, Galaxy in Flames, Galaxy in Flames by Ben Counter, Horus Heresy, Horus Heresy #3, Literature, Review. Bookmark the permalink.