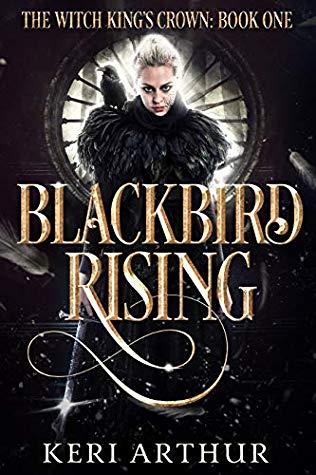 Blackbird Rising is the first novel in Keri Arthur’s newest series, The Witch King’s Crown. As you can probably guess from the name, this is a new take on the Arthurian legend. I know there have been a lot of these coming out lately – but trust me, this one is unlike all of the others. The twists are much harder to predict, and the focus is a brilliant new perspective.

Inspired by the legend of King Arthur, this is a modern fantasy, one full of magic, lore, and responsibilities. The sword of the Witch King has sat in the stone for hundreds of years. And its Gwen’s job to make sure it remains safely there.

It’s been the job of every woman in the De Montfort line. So it’s something she’s well prepared for. Or so she thought. But there’s strange magic on the air, and it brings with it new allies, sudden danger, and a series of murders.

“Someone was out there, watching from afar. While there was no immediate sense of danger, unease still crawled across my skin.”

Blackbird Rising was an intense and richly detailed novel. One that I still haven’t been able to get out of my head, and it’s been almost a week. I loved this novel and Arthur’s take on Arthurian legend, and the long term impact that lore would have.

Gwen is a spunky and sassy character, one who has been well trained for her job. It was easy to appreciate her humor and determination. What’s more, Arthur presented us with a character that knew her limits – such as when to let somebody else step up for the fight. I respect that. And no, it wasn’t an instance of letting the men fight for her, I promise!

In fact, that’s related to some commentary that ran throughout the book. Social imbalance and sexism came up several times over the course of Blackbird Rising. Sometimes they were key parts to the story, other times they were cleverly woven in. I personally appreciated seeing Arthur’s take on the matter, especially since it felt relevant to Gwen’s predicament on more than one occasion.

Keri Arthur’s worldbuilding was once again shown off to great effect in this novel. This is a modern world, yes. But it is also full of magic, lord, and bloodlines that carry the responsibility and weight of both.

I couldn’t get enough details about the different bloodlines, their specialties, and their lore. I’m very much looking forward to seeing their appearances (or even mentions) in future novels for that very reason.

Alongside the main plot (which was delightfully dark and gritty) there are a lot of subplots and hints strewn about. I think I can guess where one or two of those elements are going to lead. But for everything else? I’m looking forward to being surprised.

As a huge fan of Keri Arthur, I’m not in the least bit surprised that I ended up loving Blackbird Rising. I am still wholly impressed by what she delivered, and can’t wait to see what the next installment of this series will bring.

I am an avid animal lover, photographer, reader, and much more. While my photography blog is feeling a bit neglected at the moment, the other sites I'm involved in are going strong. ✧I review books, comics, and basically anything else in the literary world over at Quirky Cat's Fat Stacks (of Books). ✧I review comics and books, as well as write content for Word of the Nerd. ✧I review comics for Monkeys Fighting Robots. ✧I write content for Screen Rant and CBR. ✧I write book reviews for The Review Crew.
View all posts by Liz (AKA Cat) →
This entry was posted in Fantasy, Uncategorized and tagged Blackbird Rising, Blackbird Rising by Keri Arthur, Book, Book Review, Books, Fantasy, Fantasy Novel, Fantasy review, Fiction, KA Publishing, Keri Arthur, Literature, Review, The Witch King's Crown, The Witch King's Crown #1, Urban Fantasy. Bookmark the permalink.