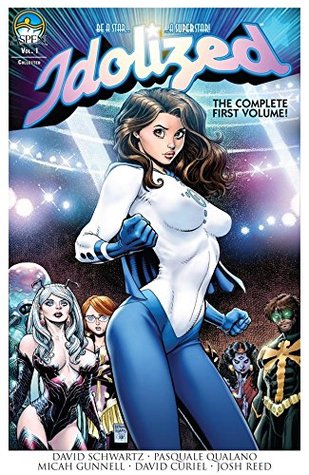 I received a copy Idolized Vol. 1 through NetGalley in exchange for a fair and honest review.

Idolized Vol. 1 introduces us to a world where superpowers have become commonplace. So much so that it’s been integrated into popular culture. That sounds like a cool thing, until you think about the inevitable reality shows that would pop around surrounding those people.

Idolized is the name of this series, but it’s also the name of a television show within this world. It’s the superhero version of American Idol, to put it bluntly. And that’s where our leading character, Joule, comes into play.

Like any iconic hero, Joule has a tragic past. She failed to save her parents, and now she’s seeking redemption. And revenge. But which one will win out, when push comes to shove? Read this volume to find out.

Idolized Vol. 1 was an interesting read. I’ve read plenty of superhero series where powers have become a common thing. But I’ve never seen a take such as this one. I’ll admit it’s an interesting viewpoint – albeit a bit horrifying (and painfully realistic, in a sense).

When I first spotted Idolized, I found myself really excited to read it. I love strong female leads, obviously. And this looked like something I had never read before. And I was right on both counts there. But it also felt like something was…missing? I don’t know, I just didn’t get the emotional connection I was hoping for.

David B. Schwartz did an excellent job coming up with this world and the unique setting within. I love that they took a superhero trope and tried to play with it, just a little bit. It was still very clearly a trope, but it was an acknowledged one at least.

As for the artwork, I’m going a bit back and forth on it. On the one hand, I really loved some of the elements within in. On the other hand, sometimes it felt a little too fan-service-y for my liking. For example; the statically ripped clothing that reveals as much as possible, while the skin underneath is somehow unblemished. That sort of thing.

Idolized had a huge team of artists working behind the scenes. Michah Gunnell Pasquale Qualano, David Curee, and Josh Reed were all involved in this project in some manner. And it showed. The color palette was vibrant and full of life. Though I may be biased there; I love the concept of a hero wearing a lot of white.

An interesting decision for this series is the covers. Instead of the more typical hand-drawn and colored pages, you’ll instead notice that they are photographs. That may seem a bit odd at first, but it actually fits nicely with the whole ‘superhero idol’ theme.

On the whole, I think I was just a little bit disappointed with Idolized Vol. 1. But only because I had such high hopes for it – and can still see all the potential in this series. I’m not sure if there will be more to this series, but I’m hoping that if there is, they can increase the emotional connection somewhere along the way. That would be wonderful.

I am an avid animal lover, photographer, reader, and much more. While my photography blog is feeling a bit neglected at the moment, the other sites I'm involved in are going strong. ✧I review books, comics, and basically anything else in the literary world over at Quirky Cat's Fat Stacks (of Books). ✧I review comics and books, as well as write content for Word of the Nerd. ✧I review comics for Monkeys Fighting Robots. ✧I write content for Screen Rant and CBR. ✧I write book reviews for The Review Crew.
View all posts by Liz (AKA Cat) →
This entry was posted in Comics, Graphic Novels, Uncategorized and tagged Book, Book Review, Books, Comic, Comic Books, David B. Schwartz, David Curiel, Fiction, Graphic Novels, Idolized Vol. 1, Literature, Micah Gunnell, Net Galley, NetGalley, Pasquale Qualano, Review. Bookmark the permalink.