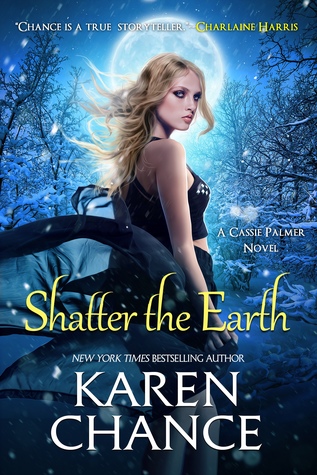 Shatter the Earth is the tenth novel in the Cassie Palmer series by Karen Chance, and this is a series still going strong. It’s admittedly one of my favorite series, so you’ll have to forgive my slight bias in recommending it so much!

Cassie Palmer has been going through a lot of stuff in the past year – that much is safe to say. Worse, she’s got a whole lot of her plate, being Pythia, chief seer, and in charge of her entire court. Oh, and don’t forget the impending war. Because Cassie sure hasn’t forgotten it.

You’d think that her ability to time travel would have simplified things for her. Or at least bought her some more time. And for the most part, you’d be wrong. Her abilities have only ever proven to further complicate her life.

Now she must deal with the aforementioned war, alongside personal and political problems. Some of which are about to collide, as an ally is on the brink of self-destruction – and he may well take her and others with him.

“My name is Cassie Palmer, the time traveling, ghost whispering, chief seer of the supernatural world, a job description that sounds way more fun than it actually is.”

Holy cats. Shatter the Earth was so much better than I had hoped or expected – which is seriously saying something! I’ve been looking forward to this delightful book since the moment Karen Chance hinted at the release date. And boy was it worth the wait.

Admittedly the wait wasn’t as bad as normal, since Chance really went all out in delivering this book to her fans as soon as possible. This is a fact that I am extremely grateful for. But that is probably no surprise. I imagine all of her fans are feeling the same way, right about now.

So where to start? In short; I loved everything about this novel. I feel like Chance really found the perfect balance here, between the personal and the political. More than that, I really loved Cassie in this book. It was brilliant seeing her deal with a whole new variety of dilemmas.

Even knowing that she was influenced (by reasons obvious to fans that read the last book, but I’ll still avoid saying just in case), I have no doubt that we saw a lot of growth for her character this time around. It’s fascinating seeing how far she’s come.

The Mircea plot was fantastic, if I may say so. I really love the concept of older vampires having more problems rather than less. It really fits with the aesthetic, and it explains why there aren’t more of them around. Mircea’s particular obsession made sense, and while it certainly risked breaking him at times, it also made him feel oddly human at others. It was a deliciously complex situation to read about (and that’s coming from somebody who is Team Pritkin all the way).

As for the rest of this book? I’m shook. Seriously, there were so many elements and moments that I had no chance of predicting. Or preparing myself for. Karen Chance wrote a brilliant novel full of emotional impact here, and I’m still reeling from everything that happened.

There’s one scene in particular that still has me all sorts of torn up, but I honestly agree with the risk that Karen Chance took here. As painful as it is for me to admit, it feels right, what was done here. Natural for the story, for the characters, and for the sake of development. Hats off for that decision.

I almost feel greedy saying this, but I’m already looking forward to the next novel in the series. Though that might be because it already has a title (Ignite the Fire) and cover – both of which look amazing! I have no doubt that they will be worth the wait.

I am an avid animal lover, photographer, reader, and much more. While my photography blog is feeling a bit neglected at the moment, the other sites I'm involved in are going strong. ✧I review books, comics, and basically anything else in the literary world over at Quirky Cat's Fat Stacks (of Books). ✧I review comics and books, as well as write content for Word of the Nerd. ✧I review comics for Monkeys Fighting Robots. ✧I write content for Screen Rant and CBR. ✧I write book reviews for The Review Crew.
View all posts by Liz (AKA Cat) →
This entry was posted in Fantasy, Uncategorized and tagged Book, Book Review, Books, Cassandra Palmer, Cassandra Palmer #10, Cassie Palmer, Cassie Palmer #10, Fae, Fantasy, Fiction, Karen Chance, Literature, Mage, Review, Shatter the Earth, Shatter the Earth (Cassie Palmer #10), Shatter the Earth by Karen Chance, Time Travel, Urban Fantasy, Vampires. Bookmark the permalink.