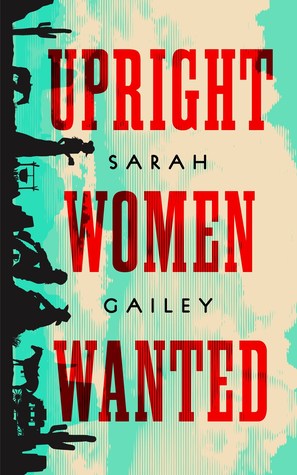 I received a copy of Upright Women Wanted through NetGalley in exchange for a fair and honest review.

Upright Women Wanted is the latest novel by Sarah Gailey, and I’ve been seeing nonstop chatter about this book online for months (I’m not joking). Between that fact, and the fact that I love this author, I knew this was a book worth checking out (pun intended).

Imagine a Western novel merged together with several key elements; librarians, equal rights, and a strong queer identity. Now you’ve got a decent idea of what’s in store. Set in the near future, this novel portrays a darker world in which people are not free to be themselves. That’s where the Librarians come in. They carry books, supplies, and everything else needed, across state borders to the people that need it most. Though that is a gross simplification of what they do.

Esther didn’t know the full breadth of what a Librarian does, but that didn’t stop her from running away to join them. It was her one hope – her final hope – for saving her life and herself. Little did she know, that they were exactly the people she needed in her life.

If you’ve ever felt like you’ve had to hide or lock a part of yourself away, then Upright Women Wanted is the novel for you. This is a tale of Librarians, courage, love, and resistance. It’s a chilling world, but the characters themselves are full of grit and determination.

Upright Women Wanted was a thrilling – and terrifying read. Anytime you read a novel such as this, set in the near future, it’s hard not to feel the full impact behind the words. This story rang true to me, as I’m sure it will to many other readers out there.

I’m not ashamed to say that Esther’s plight made me cry. I couldn’t hear those words and hide from them. I’m sure that was part of the point here. But it was all the more heartbreaking because of that. It certainly added to the power and impact of this tale. And even though it did make me cry, I don’t regret that for a minute. Because it also made me smile. It made me proud.

I can see why people have been talking so much about Upright Women Wanted. This is a book that is going to make you feel things. The Librarians, Esther’s story. They all had an important story to tell, and I for one enjoyed every moment of hearing (well, reading) it.

Upright Women Wanted was a brilliant read, and well worth all of the online attention I’ve been seeing. I’m so happy to have finally joined the ranks of people who have read it, for now, I can understand and follow all of that chatter!