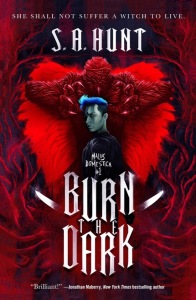 I received a copy of Burn the Dark through NetGalley in exchange for a fair and honest review.

Burn the Dark is the first novel in S.A. Hunt’s Malus Domestica series. Technically speaking, this isn’t a new series. It’s just that this is the first time we’ll be getting a chance to read it in English. Which is great for me!

The series is an action-adventure horror series, much in the same tone as Stranger Things. Basically, picture a bunch of kids/teenagers off on a witch hunt, and you’ve got an understanding of the core of the theme.

Robin is your average teenager. Well, if by average you mean that she lives in her van, runs a YouTube channel, and hunts witches. Yeah, okay, so not exactly normal. She’s been filming her witch-hunting escapades for months, and pawning it off as some sort of Blair Witch Project for the sake of income.

The real question is; why did Robin start hunting witches? And how far can she go, when working solo? As it turns out, she won’t be by herself for very long. As for the reason, she hunts witches? That’s personal.

“They die from the inside out. The deadness slowly makes its way to the outside.”

Warnings: Most of the heavier subjects covered within Burn the Dark are actually pretty commonsense, and thus the sort of thing you can easily expect. There are hints towards animal death (incidental and implied), abuse, burning, and other things along those lines.

Burn the Dark was a fun and interesting read. Whoever came up with the idea to compare it to Stranger Things was pretty spot on. Though it did feel like the leading characters were slightly older – but that kind of works, given their backstories.

Robin’s whole backstory and character arc was actually pretty fascinating. And I’m not ashamed to admit that hers was by far my favorite of the perspectives, though I enjoyed reading about everybody else, of course. Hers felt the most human, as well as being the epicenter of the plot.

This was a fast-paced read, with something happening at almost any point. It helps that the characters kept splitting off and getting themselves into more danger. Well, it helps the reader. The characters not so much.

I feel like this series is a darker twist on the urban fantasy trend, and I’ve got to say, I’m all for it. I loved the tone and feel of this novel, and would love nothing more than to see a whole lot more like it. Well, not exactly like it – you get what I’m trying to say here. The blend of horror and fantasy was very well done.

This is the first novel I’ve read by S.A. Hunt, but I enjoyed it. I think I’ll probably try to set aside some time to follow the rest of this series (as it gets translated – I have to look into that). I’m curious to see how far they push this.

I am an avid animal lover, photographer, reader, and much more. While my photography blog is feeling a bit neglected at the moment, the other sites I'm involved in are going strong. ✧I review books, comics, and basically anything else in the literary world over at Quirky Cat's Fat Stacks (of Books). ✧I review comics and books, as well as write content for Word of the Nerd. ✧I review comics for Monkeys Fighting Robots. ✧I write content for Screen Rant and CBR. ✧I write book reviews for The Review Crew.
View all posts by Liz (AKA Cat) →
This entry was posted in ARC, Fantasy, Uncategorized and tagged Book, Book Review, Books, Burn the Dark, Burn the Dark by S.A. Hunt, Fantasy, Fantasy review, Fiction, Literature, Net Galley, NetGalley, Review, S.A. Hunt, Tor, Tor Books, Tor Publishing. Bookmark the permalink.