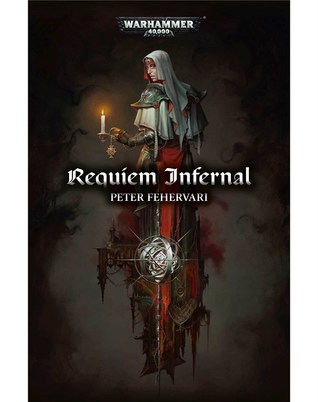 I received a copy of Requiem Infernal through NetGalley in exchange for a fair and honest review.

Requiem Infernal is part of the Dark Coil series, which will hopefully have more books added to it in the near future. Written by Peter Fehervari, the novel fits in with the world of 40K, with a delightful focus on the Adepta Sororitas.

If you’ve read any other 40K novels, let me just say that you need to lay down all of your expectations before picking up Requiem Infernal. This book reads nothing like all of the others – and that’s not a bad thing.

This novel read as a blend between 40K lore and a disturbing and disquieting horror novel. It had the best of both worlds, and told a tale unlike any other. The world and characters are captivating – even as their quest and the mysteries surrounding them give readers chills down their spines.

The Adepta Sororitas of the Last Candle live on an isolated island, on an isolated planet. And they like it that way. But that’s all about to change, as a desperate group of survivors are seeking their medical aid.

Sister Hospitaller Asenath Hyades is one of the Adepta Sororitas. But there’s so much more to her than meets the eye – though she would prefer that nobody else knows or recalls everything that she has seen or done.

Commissar Ichukwu Lemarch is one of the few surviving members of his company – The Exordio Void Breachers. They are his brothers. Even if they see him as an outsider, he’ll always consider himself part of their group. They are the family he has always sought.

Jonah Tythe is an Imperial Preacher. But like many others in this world, he is nothing and everything that he appears to be. His mission is his world, though it is one that he keeps close to his chest.

“’Truth is our first and lasting light’ Asenath recited. ‘Speak only as you see and seek to be, for all else is darkness.’”

Requiem Infernal was a seriously intense novel – but in the best of ways. Peter Fehervari’s writing style perfectly complemented the dark and disturbing tale, with events unfolding in the eeriest ways possible.

It’s so easy and tempting to walk into a novel like this and expect it to follow a specific formula. But Fehervari quickly destroyed that preconception. It was fascinating seeing what elements of the larger world were included here, and he left more than one false trail for readers to follow. It was thrilling, trying to put together the pieces of the puzzle before it was too late.

I’ll confess that part of me wanted to be frustrated that only one of the perspectives given to us was an Adepta Sororitas. But honestly? Requiem Infernal was so brilliantly written that I couldn’t even hold a grudge if I wanted to. Instead, I find myself hoping for more works like this.

There was something so florid about the way in which Requiem Infernal was written. The words seem to just flow off the paper – getting immediately trapped inside my head. The world – as creepy as it was – came to life with the descriptions given.

I was shocked by how intricate and disturbing parts of this novel was. It was perfect, and should be included in anybody’s thrilling reads list. And best of all, this book comes out just in time for Halloween!

This was my first piece of work written by Fehervari, but I can assure you that it won’t be my last. He has officially made my list of authors to watch, not to mention that I will absolutely be checking out his backlog of works.