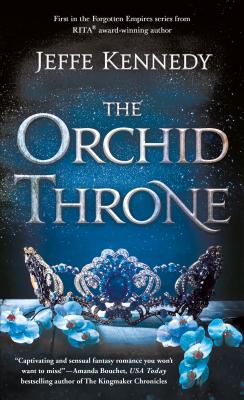 I received a copy of The Orchid Throne through the Goodreads Giveaway program.

The Orchid Throne is the first novel in a new series by Jeffe Kennedy. The series itself is called the Forgotten Empires, and is a perfect blend of fantasy and romance. And there’s a healthy dose of revenge story thrown into the mix as well.

In a world where a brutal king acts as a tyrant to the lands, few are brave enough to stand up to him. Most kingdoms can only hope to survive on the outskirts. That is, before two people from vastly different backgrounds decide to change their fates.

Euthalia is the Queen of Calanthe, and she is betrothed to the bloody king himself. She’s been able to put off the marriage for as long as possible – thus keeping herself and her people safe. And make no mistake, she’ll do whatever it takes to keep her kingdom untouched.

Conri is the Crown Prince of Oriel, or more accurately, he’s the King of a land that no longer exists. He calls himself the King of Slaves, a title he has grown into. It’s a name that focuses his plans for revenge – as he’ll stop at nothing to take down the tyrant who destroyed his people and his family.

“No one believes in omens or curses anymore. Or hope, for that matter. In this too, I am alone.”

Warnings: There are several heavier subjects hit upon over the course of this novel. Slavery is the biggest, though there’s also a focus on female purity, and mention of rape (though it never occurs on page, or even in the present, thankfully).

The Orchid Throne was a fascinating read, one where I found myself desperate to see more of the world that’s been so devastated by the king. The magical system alone had me captivated from start to finish – and eager for the next novel in the series.

I adored the way the novel established it’s two characters, Euthalia (aka Lia) and Conri (aka Con). Both come from such different backgrounds, and both deal with their problems (mainly the bloody king) in such different ways. It was fascinating to see, even if I didn’t always agree with their decisions.

I will say that I especially loved the front that Lia was able to put on. It proves that characters like her are so easy to underestimate, but that doing so will cost you. Likewise, it was satisfying to watch Con’s revolution growing, all thanks to those who felt the same way as him.

There were a lot of undertones and subplots in this novel – which I’m sure will be touched upon in later novels. I’m guessing that this will end up being a trilogy, though I obviously don’t know for sure. I will be curious to see how long the series does end up running for.

I think my biggest complaint about The Orchid Throne is that it just felt like it sort of…ended. It wasn’t a cliffhanger per se. But it also didn’t have a conclusive ending. I know that it was only ever meant to be the first in a series, but it still felt like something could have been added to the end here.

On the whole, The Orchid Throne was a fascinating and thrilling read. The fantasy meets political revolution is exactly my sort of book, so I basically knew that I was going to enjoy this one no matter what. And I was right. I’m looking forward to seeing how this plot unfolds in future books.

I am an avid animal lover, photographer, reader, and much more. While my photography blog is feeling a bit neglected at the moment, the other sites I'm involved in are going strong. ✧I review books, comics, and basically anything else in the literary world over at Quirky Cat's Fat Stacks (of Books). ✧I review comics and books, as well as write content for Word of the Nerd. ✧I review comics for Monkeys Fighting Robots. ✧I write content for Screen Rant and CBR. ✧I write book reviews for The Review Crew.
View all posts by Liz (AKA Cat) →
This entry was posted in ARC, Fantasy, Uncategorized and tagged ARC, ARC Review, Book, Book Review, Books, Fantasy, Fiction, Forgotten Empires #1, Goodreads, Goodreads Giveaways, Jeffe Kennedy, Literature, Review, Romance, Romantic Fantasy, St. Martin's Press, The Orchid Throne (Forgotten Empires #1), The Orchid Throne (Forgotten Empires #1) by Jeffe Kennedy, The Orchid Throne by Jeffe Kennedy. Bookmark the permalink.