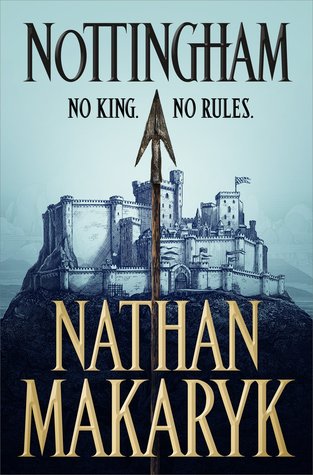 I received a copy of Nottingham through BookishFirst in exchange for a fair and honest review.

Have you ever looked at the tale of Robin Hood and just wished there was more to it? More depth, more history, more everything? That’s what Nathan Makaryk did, and the end result was Nottingham.

Nottingham is the story I’ve always wanted from Robin Hood. It has all of the elements I know and love – but there’s so much more to it. I honestly can’t emphasize that fact enough. Makaryk added all of the missing elements, as far as I’m concerned.

To be clear, this isn’t just a ‘historical version’ of Robin Hood. It adds history elements, of course. But it also adds politics and wits and so many quotable moments as well. So many, in fact, that I can’t help but have a mental fancasting going…who I’d like to see play the roles of these characters Makaryk has fleshed out.

Though I will say that the added historical elements did flesh out this novel in a way I’ve never seen before. It made the reading so much more…rich. To be honest, I usually tend to read my books in as few sittings as possible. But for Nottingham I took about a month (give or take) to fully read it through. There were just so many little tidbits to soak up and think about. It just felt natural to put the book down every now and then and just think about it.

I think in truth, it was the wit that really sold me on this novel. I loved the extra details, and all of the additional twists and turns. Of course I did. But what really made this novel something was the characters. That’s always been the case for this tale, hasn’t it? Well, Makaryk made them feel even more real, and even cleverer than before. It was perfection.

As for those twists and turns I mentioned? Some of them were obvious and expected – most because they followed the path we know and expected to see. But then there were the ones that came out of left field. They really blew me away. Not only because they surprised me (that much is obvious) but because of how well they fit the story being told.

All in all, Nottingham was a perfect and brilliant read. I know that some people are going to pick it up and read it exactly like I did – a little bit at a time. And I know others are going to binge right through the whole thing. And I think both types of readers will enjoy this one. I know I did.

I am an avid animal lover, photographer, reader, and much more. While my photography blog is feeling a bit neglected at the moment, the other sites I'm involved in are going strong. ✧I review books, comics, and basically anything else in the literary world over at Quirky Cat's Fat Stacks (of Books). ✧I review comics and books, as well as write content for Word of the Nerd. ✧I review comics for Monkeys Fighting Robots. ✧I write content for Screen Rant and CBR. ✧I write book reviews for The Review Crew.
View all posts by Liz (AKA Cat) →
This entry was posted in ARC, Fantasy, Uncategorized and tagged Book, Book Review, BookishFirst, Books, Fantasy, Fiction, Forge Books, History, Literature, Nathan Makaryk, Nottingham by Nathan Makaryk, Review. Bookmark the permalink.