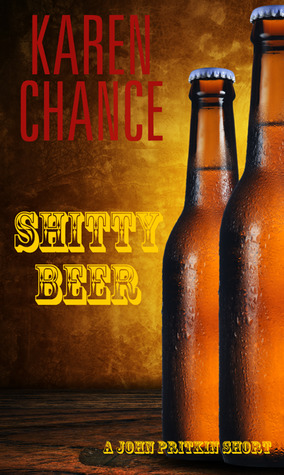 Shitty Beer is a short story within the world of Cassandra Palmer. It’s numbered as 2.5, but really it’s happened during and after Claimed by Shadow. But honestly, you could probably read it whenever you wanted to.

It’s also one of the only times we get to see things from Pritkin’s perspective, which I do appreciate. Pritkin is by far one of my favorites though, so I’m probably a little bit biased there. The whole short story is following Pritkin and his reactions to certain events that happened during Claimed by Shadow. And I think this might be the first time in the series that we really get to see Pritkin’s more emotional side.

I’ll confess that I actually had never read this short story until now – I’m actually missing a lot of the short stories, so I’m hoping to get them during this read through of the series. I honestly had no idea what I was missing here, and wish I had read it sooner.

Shitty Beer was brilliantly written, but it also completely broke my heart. Pritkin’s telling of what happened to Mac, and how he felt about it…it was rough. It was also something we needed to see; the loyal and caring side of Pritkin.

I know we didn’t really get that much of a chance to get to know Mac, but I really liked his character. And I still miss him to this day. So this was a bit of salt on the wound, but mostly in a good way. It was nice to see that Mac was and is missed. Not just by Pritkin, but by other mages as well (I can only interpret Pritkin’s safe passage as a way of honoring Mac).

This story was so emotional, and even knowing how it was going to turn out (meaning that we knew Mac wasn’t coming back from the mission), it didn’t really help reduce the blow. I guess some part of me is always going to hope that he’ll magically come back.

Also, it really hit me during this read that Mac was truly Pritkin’s friend. And quite possibly one of his only trustworthy friends to boot. That’s a hard loss. So I’m glad we got to see more of how well (or poorly) Pritkin took it).

And then of course we finally got to the infamous scene where Pritkin described Cassie to Mac. That was pure gold, and also went a long way in hinting at his true feelings.

I loved everything about this short story, and I’m actively looking forward to reading the rest of them as well. If they’re even half a solid as this one, I know they’ll be great reads.

Tarot Card: None mentioned, but it is from Pritkin’s perspective so it’s not surprising really.

Favorite chapter/scene/plot point: The final scene, where Pritkin found a drink waiting on the counter for him.

Favorite quote: “John watched as his friend held his own brew up to his shoulder, where a painted jaguar sprang at it, grasping it between its paws and gnawing it enthusiastically. Only to spit the sadly mangled bottle cap into the dirt a moment later, a smug look on its tiny face.”

MVP (not including Cassie): Am I allowed to say Mac?

Interesting bits I noticed this time ’round: This was actually my first time reading this one, believe it or not! I missed a lot of the short stories that went along with the series. This read through I’m not going to miss them though!

What further research did this book inspire (historical, mythological, etc): None.

Unanswered questions: Not an unanswered question as much as a wish. I would have loved to see more of Mac and his tattooing process in general. I really do miss his character, despite the relatively short appearance he had.