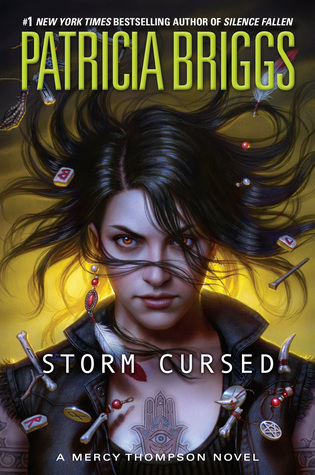 I received a copy of Storm Cursed in exchange for a fair and honest review.

Storm Cursed is the newest novel in the Mercy Thompson series. That brings the series up to a grand total of eleven books, and counting (and that’s assuming you don’t count the Alpha and Omega series as part of it). And yet I can honestly tell you that I love this series, and hope I don’t see it end anytime soon. It’s still going strong, after all these years. And I feel like there’s more to Mercy’s story still.

In a way it’s funny, because the series is still called the Mercy Thompson series, even though Mercy herself would be very quick to correct us all on the name. Her name has changed to Mercy Thompson Hauptman, and here’s hoping we don’t see it change!

In previous novels of the series, we’ve seen Mercy go up against vampires, fae, deadly demigods, and so much more. But we’ve never really seen her tangle with witches. That is, until now. Storm Cursed continues the tradition of changing the focus and the antagonists that Mercy has to deal with. And it did a brilliant job doing so.

Warnings: This warning has come up before, but there are some graphic scenes in Storm Cursed. There’s a graphic description of torture and death. Those targets were witches, but unfortunately also some innocent animals. There is one scene in particular that is rough, and that I almost skipped. So do consider yourself warned.

Storm Cursed was a brilliant and fast-paced novel. It deals with some of the most intense subjects I’ve seen Mercy forced to deal with. Yet it also manages to balance out the bad with the good, when the opportunity arises.

Like all the other novels in the Mercy Thompson world, this novel flew by too quickly. Granted, it didn’t help that I read it all in one sitting. But in my defense, I just couldn’t put it down! Everything about this novel compelled me to continue reading.

This is the first time we’ve seen Mercy really go up against black witches, and I can certainly see why she’d prefer to avoid it. But I think we’ve been building up to this moment for a while. I noticed that there was some foreshadowing in the last novel, and that it came to fruition here. I love that Patricia Briggs was able to sneak those hints in though, as it really did add to the impact here.

Patricia Briggs really nailed it when it came to capturing the horror shown in this novel. At times it felt like almost too much – and I was merely reading the book. I can’t even imagine what it would have been like to actually be present. It certainly motivated me to root for the good guys, so to speak!

In the past I’ve complemented the character development in this series. Once again I have to bring that up. Patricia Briggs does such a wonderful job not just with the main characters, but all of the side characters as well. There are so many mysteries among the pack. Some of them have been solved, while others we’ve only just begun to scratch the surface. I love that the series is complex enough to contain these little elements.

In the case of Storm Cursed, one of those mysterious character backgrounds ends up seriously saving Mercy’s butt (as well as Adams). It was mind blowing…but it also made complete sense when I took the time to think about it. So in that sense it was absolutely perfect.

Actually, looking back on it, there was a ton of stuff fit into this novel. Individual character development, multiple scenes and situations that Mercy had to deal with or here about, and then the buildup of the main plot itself. I can’t believe that Patricia Briggs managed to fit so much into one book! It didn’t feel like I was having information thrown in my face. Everything felt like it was naturally progressing as it should. And yet, there were so many twists and turns that occurred. It was really well done.

I’m thrilled with Storm Cursed. It held up to all of my expectations, and then some. The only downside is that I’m finished with the book, and that I can’t read it for the first time all over again. That being said – I’m totally going to go and reread it again in the near future. It’s worth it.

I am an avid animal lover, photographer, reader, and much more. While my photography blog is feeling a bit neglected at the moment, the other sites I'm involved in are going strong. ✧I review books, comics, and basically anything else in the literary world over at Quirky Cat's Fat Stacks (of Books). ✧I review comics and books, as well as write content for Word of the Nerd. ✧I review comics for Monkeys Fighting Robots. ✧I write content for Screen Rant and CBR. ✧I write book reviews for The Review Crew.
View all posts by Liz (AKA Cat) →
This entry was posted in ARC, Fantasy, Uncategorized and tagged Book, Book Love, Book Review, Books, Fantasy, Fantasy review, Fiction, Literature, Mercy Thompson, Patricia Briggs, Review, Storm Cursed, Storm Cursed (Mercy Thompson #11) by Patricia Briggs, Storm Cursed by Patricia Briggs. Bookmark the permalink.