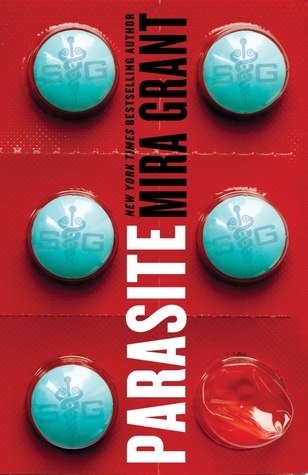 Parasite is the first novel in the Parasitology series by Mira Grant. You may also know her as Seanan McGuire, as Mira Grant is simply a pennames she uses for her science fiction works.

The novel is set in the not too distant future, where scientists have managed to come up with a new way of treating conditions, providing medicine, and keeping people in general good health. And it’s one you’d never expect to hear: parasites. Through the use of a modified tapeworm people can expect their daily medications to be released into the bodies. They can avoid having to take pills, or get yearly shots, or anything else that would be required for their daily basic health.

It sounds kind of creepy, right? They must have hired an amazing marketing team to get people to sign up for it, but hey, I can see that happening.

Warnings: Parasite covers some intense subjects. It covers car accidents, brain death, memory loss, to graphic details of the human body, how parasites work, and everything in between. I don’t think any of it was too much personally, but you never know what can set a person off. I will say that somebody with any medicinal phobia might be better steering clear, just to be safe.

Whenever I read a novel that borders on being a horror or thriller, I get really worried about the animals mentioned. So I’m going to include a secondary warning/promise here. None of the animals mentioned in this novel get hurt. No matter how tense a scene gets, they’re all fine at the end of the day. I promise.

Parasite was one part science fiction and one part thriller. It was so perfectly written that I was on the edge of my seat the whole time I was reading it. Whenever I wasn’t reading it I found myself theorizing about what was actually going on. I just couldn’t get it out of my head.

I remember as I was reading how struck I was by all of the scientific facts included in the novel. I’m no expert by any means, but I’ve been around enough of them to tell when somebody has thoroughly researched their subject matter. And that’s exactly what Mira Grant/Seanan McGuire did here. Actually, in the end, she even included special thanks to all the experts she received help from. I love that extra mile she took because it made the story feel so much more disturbingly real.

I really enjoyed the characters Mira Grant created here. They were all so different and personable, on their own levels. I’m not always the best with names, but I had no trouble telling all the major players apart here. Even the secondary characters were distinct.

I absolutely adored the way she designed SymboGen. I can absolutely see a company behaving that way, much as I hate to admit it. I remember when I read the blurb my first thought was “wow, that company must have a great PR team!” and amazingly enough, Mira Grant actually included excerpts of their ads. It added an extra level of realism, and admittedly a little bit of smug satisfaction on my part.

Other excerpts were included at the beginning of each chapter as well. Sometimes it was parts of a fictional children’s storybook, other times it was a part of an article or a journal entry. The little details here really made it feel like a collection of real events, instead of a series of fictional ones from a science fiction novel. It was a nice touch.

I’ll admit that I totally guessed the major twist revealed in the end. Truthfully, I imagine most people did. But that didn’t take away an ounce of my enjoyment. If anything, I was eagerly looking for any and all evidence to support my theory. It got me further invested in the plot.

I honestly can’t wait to start reading Symbiont. Luckily for me, it just became available at my library, so I won’t have to be waiting long. As far as I know, there’s just one more novel after that, Chimera. I’m pretty sure the series has been concluded, but I could be wrong. Actually, only being one book in I’d be okay with being wrong. I wouldn’t mind seeing more to this series.

I am an avid animal lover, photographer, graphic designer, and much more. I love to create art, and am willing to try any artistic technique at least once. I am particularly fond of artworks involving a lot of emotion and color. The purpose of my blog is for me to be open and honest with myself and the world about my attempts to grow as an artist. My other major passion is reading. My TBR pile is larger than I'll ever be able to read, and yet I can't resist adding to it on a nearly daily basis. I love to read science fiction & fantasy, graphic novels, and pretty much anything I can get my hands on. I have a couple of blogs, as you can see. One is primarily my photography, while the other are my book reviews. If you have any questions, feel free to reach out!
View all posts by Liz (AKA Cat) →
This entry was posted in Science Fiction, Uncategorized and tagged Book, Book Review, Books, Fiction, Mira Grant, Orbit, Parasite, Parasite by Mira Grant, Parasitoloy #1, Review, Science Fiction. Bookmark the permalink.