Review: The Man of Steel 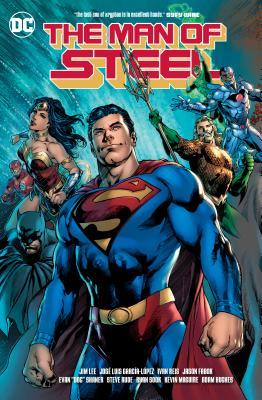 I received a copy of The Man of Steel through NetGalley in exchange for a fair and honest review.

I’m a huge fan of Brian Michael Bendis, so at this point I’ll pretty much read anything he puts on the market. So obviously I was curious when I heard that he was going to be doing a Superman plot. Sure, I had hoped something like this would happen back when I learned that DC had managed to lure him away…but I hadn’t actually expected that small hope to come to anything!

Brian Michael Bendis is well known for his work on Spider-Man, New Avengers, Alias, and Daredevil. Most recently he’s been working on Scarlet, Cover, and Peal. Meanwhile there’s basically a whole army of artists who pitched in for this one; Ivan Reis, Evan Shaner, Ryan Sook, Kevin Maguire, Adam Hughes, and Jason Fabok.

I should probably state that Superman isn’t one of the series I loyally read – I’ve missed out of a plot of plots, and I can’t pretend that I’m a die-hard fan of his character. However, I do still find him interesting, and have enjoyed the few plots I’ve read. But you may want to take anything I have to say about this one with a grain of salt, between not being a Superman expert, and being a huge fan of Brian Michael Bendis.

The Man of Steel was a really fun and quick read. It was new and different, and nothing at all like what I expected. It took risks, and while not all of those risks may have paid off, I respect the attempt for what it was.

Superman is going through a lot in this book. He’s dealing with the normal problems of being a super hero, as well as the problems of the daily life of Clark Kent. More than that though, he’s dealing with something major going on, we just didn’t know what that was until the end. It was hinted at throughout the book, and admittedly the revelation was a little disappointing; especially compared to how beautifully they set up for that moment.

I loved Brian Michael Bendis’ use of repetition. There were a few lines (which I won’t mention here, for sake of spoilers) that kept getting repeating over and over, along with a few panels that kept popping up. This really built the growing tension – I couldn’t flip the pages fast enough to find out what was happening.

There were a few points where I honestly had to stop and look at the page again to be sure that I was interpreting everything correctly. That’s not to say that it was poorly done…I just wasn’t expecting those twists, and without them bluntly stated…well I guess I went into a bit of denial? I’m not sure if that is a good thing or a bad thing.

I think the biggest complaint for the volume would have to be the bit of retconning that was done for the sake of the plot. I’ll admit it’s interesting, but even I could tell that it was not originally intended to be that way. I’d be curious to see how dedicated fans of Superman felt about it.

Obviously Superman played a major role in this novel, but Supergirl has an important role as well, and there are cameos from multiple other superheroes. And of course you can safely assume you’ll be seeing the usual cast from the newspaper as well.

I think I’ll follow this plot through to its natural conclusion. I’m too curious not to, at this point. There’s still a lot I need to see and learn about what’s going on. I hope we see Supergirl again too – I feel like she’s become somewhat vital to the plot at hand.

I am an avid animal lover, photographer, reader, and much more. While my photography blog is feeling a bit neglected at the moment, the other sites I'm involved in are going strong. ✧I review books, comics, and basically anything else in the literary world over at Quirky Cat's Fat Stacks (of Books). ✧I review comics and books, as well as write content for Word of the Nerd. ✧I review comics for Monkeys Fighting Robots. ✧I write content for Screen Rant and CBR. ✧I write book reviews for The Review Crew.
View all posts by Liz (AKA Cat) →
This entry was posted in DC Comics, Uncategorized and tagged Bendis, Book, Book Review, Books, Comic, Comic Books, DC Comics, Graphic Novels, Literature, Review, Science Fiction, The Man of Steel. Bookmark the permalink.