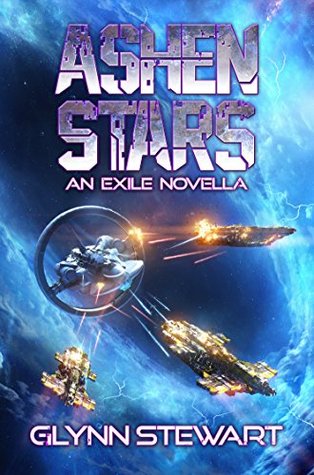 I received a copy of Ashen Stars in a sample package through NetGalley in exchange for a fair and honest review.

Ashen Stars is the novella preceding the events that occur in Exile (which only recently released). Honestly, you could read these in either order and be okay. The prequel will help you understand the main character better, but reading them in the reverse order won’t hinder you either (it’s how I did it, and I had no trouble understanding what was happening in either plotline).

Exile is the only series by Glynn Stewart that I’m up to date on. I will say that what I’ve read of his other series has impressed me, and that I wish I had found him and his writing sooner. Still, I’m enjoying the world that’s been established here.

This whole Novella is about Isaac Gallant, in one way or another. It establishes his character; right away we’re aware that he’s stubborn, hardworking, and determined not to ride on his mother’s coattails. As we delve in further it becomes clear that there’s more driving the man. He’s haunted by the actions of his mother, and even now debating about the morality and ethicality of allowing her to continue. It explains a lot about Gallant’s actions in Exile (specifically the stubborn refusal to take too much control – he fears becoming his mother).

Gallant’s journey here not only establishes the world for us, but it teaches Gallant a very important lesson as well. He knows what is right and wrong, but many of the people that surround him do not, and the longer he pretends otherwise the more complicit he becomes in their actions.

I loved this novella – I found myself diving headlong into it, and really wish it had continued. Having read Exile I will say that I do hope there’s one more novella coming out, something for between these two events. I want to see more of this transitioning perspective that Gallant is struggling with. So far what I’ve seen has been incredibly well written.

I am an avid animal lover, photographer, reader, and much more. While my photography blog is feeling a bit neglected at the moment, the other sites I'm involved in are going strong. ✧I review books, comics, and basically anything else in the literary world over at Quirky Cat's Fat Stacks (of Books). ✧I review comics and books, as well as write content for Word of the Nerd. ✧I review comics for Monkeys Fighting Robots. ✧I write content for Screen Rant and CBR. ✧I write book reviews for The Review Crew.
View all posts by Liz (AKA Cat) →
This entry was posted in Science Fiction, Uncategorized and tagged Book, Book Love, Book Review, Books, Fiction, Literary, Literature, Review, Science Fiction. Bookmark the permalink.