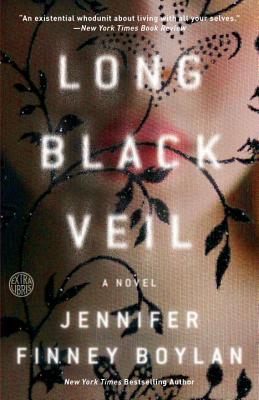 I received a copy of Long Black Veil in exchange for a fair and honest review.

Long Black Veil is described and labeled as a thriller about a crime long past, but if I’m being honest it reads much more like a study on human nature, specifically focusing on the guilt we carry. I think knowing this before going into it would greatly improve one’s enjoyment of the novel, so I think it’s an important note to make.

Long Black Veil will immediately grab your attention; any novel that starts off talking about a character’s ‘first death’ will likely be one that’ll turn a few heads. How could it not? I don’t know how everybody else will react to this beginning, but it had me immediately doubting the accuracy of the novel’s labeling. How could a character have died more than once, and still be here to provide narrative? Is there a magical or fantasy element in here? A psychological one? (where the perspective is confused about what actually happened). Or are we being intentionally misled, with the character using terms that don’t strictly meet their definitions or intent. Without reading further, I don’t think I could have fathomed a guess as to which one of these options it was.

Before I sat down to write this review I took a few minutes to take a peek at what others thought of this novel. It seems that I’m not the only one that felt conflicted about it, not just in reading it, but in how to assess and review it. While I can safely say that it was an interesting read, I did feel like I was consistently being interrupted from the narrative, that I was losing immersion somehow.

In the beginning I think it was because I didn’t really know who was who, and it took me about four chapters to actually figure that out. Later it was because things got so complex, with the truth alternatively being ousted or obfuscated. It was disorienting.

No matter how this novel makes you feel, I can all but promise that it’ll make you think. Seeing Judith’s dramatic change over time will make you think about everything she’s gone through to get to that point in her life. Seeing Quentin’s pain may confuse you, as he won’t even admit the reason for it to himself, let alone to Rachel and the rest of his friends. There are lots of odd and different bits to this story, and all of them together make for a lot of emotional noise, but I think that was the intent.

Long Black Veil is intended to get us thinking; I believe we’re supposed to take the time to assess how it made us feel. That isn’t a simple matter to take on, which explains why so many of us feel conflicted upon finishing this novel (though I believe it’s also because we’re uncertain on if we enjoyed it or not). I for one finished this novel feeling like the story was left incomplete; it left me feeling a little sad and dejected.

I’ll be curious to see if others agree with my assessment, and whether you do or do not agree, I would really love to hear what you have to say about this novel. Partially because I’m still not sure myself, and would very much like a chance to talk it out with others.

I am an avid animal lover, photographer, reader, and much more. While my photography blog is feeling a bit neglected at the moment, the other sites I'm involved in are going strong. ✧I review books, comics, and basically anything else in the literary world over at Quirky Cat's Fat Stacks (of Books). ✧I review comics and books, as well as write content for Word of the Nerd. ✧I review comics for Monkeys Fighting Robots. ✧I write content for Screen Rant and CBR. ✧I write book reviews for The Review Crew.
View all posts by Liz (AKA Cat) →
This entry was posted in Fiction, Thriller, Uncategorized and tagged Book, Book Review, Books, Literary, Literature, Review, Thriller Review. Bookmark the permalink.