Review: The Company of Demons by Michael Jordan 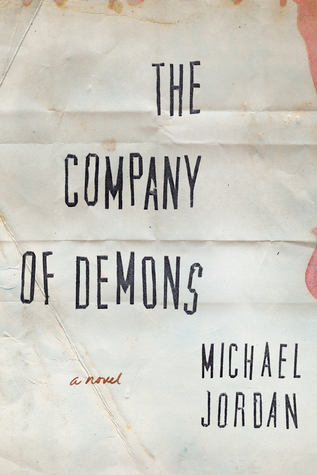 I received a copy of The Company of Demons from Bookish First in exchange for a fair and honest review.

If you’re looking for a thriller that’ll make you feel conflicted, then The Company of Demons is the book for you. Michael Jordan’s debut novel (and no, not the Michael Jordan you’re thinking of) is about a man (John Coleman) caught in the webs of two different serial killers. There will be times where you’re not really sure who to root for (okay, that’s a bit of an exaggeration, I never rooted for any of the killers to win, but it was close), and times where you feel like you know which way is up.

Warnings first: As mentioned above, there are two different serial killers in this book. Both have graphic ways of killing their victims, much of which is explained. (Serious spoiler warning here) there’s a scene where John is being tortured that I found to be a bit more graphic than I am comfortable with, and in the end resorted to skim reading it. Considering yourself warned.

I’ll admit I’m feeling conflicted about this novel. Never have I read a thriller where I disliked the main character so much (with the exception of where the main character was the killer of course). And I don’t mean he was a poorly designed character, I mean he’s a jerk. I’ve never been put in a position where I have to sincerely hope the jerk in the book makes it out okay, and that was a different experience for me. I actually appreciate that, in a way. Jordan has shown me that the main character doesn’t have to be charismatic, or moral, or nice to get put in a really shitty position and still have us care about him.

Let’s erase any illusions about what is going on here; John Coleman is not a good person. At every turn we’re reminded of yet another reason to not like him (he’s a cheater, alcoholic-refusing treating, racist, etc), but I actually think that was the point. Much like A Christmas Carol we’ve been introduced to a character that many would consider irredeemable, in hopes of showing us the amount of progress he’s made by the end of the book. At least, I believe that is what Jordan was attempting to do here. While Coleman isn’t the redeemed man that Scrooge is by the end (but that may be my bias showing, as I adore A Christmas Carol) he still is a changed man, and one can’t deny it. Granted, we only get to see him taking the first steps into his new life, so we don’t get the feeling of permanency at all here (the one thing I think this moment was lacking).

Despite starting the novel off with a killing, the main plot sort of takes a while to get rolling. Probably because there’s really two (or three, depending on how you want to look at it) plots going on at once. First there’s the serial killer/s to consider. They have to be properly established first, then the whole mess with Jennifer (and I still maintain John is an idiot to not have seen that one coming), plus the side effects and reactions to everything already mentioned. So it takes a bit, so say the least. Things really start moving around the halfway point.

If you’re reading this novel now, and are looking up reviews to decide if it’s worth finishing (something I believe we’ve all done at one point or another), I would tell you to give it a shot. If nothing else, you’ll get to see John get put the wringer (aka court) a bit, which is slightly satisfying, even if it is for a crime he didn’t commit.

All things said this was a pretty strong first novel. I can’t pretend I like the characters introduced here, but I also don’t think I was supposed to. The plot could have used a bit more work (I think a simpler one would have sufficed) but on the whole it was pretty decent. I’ll be curious to see what Michael Jordan comes out with next.

I am an avid animal lover, photographer, graphic designer, and much more. I love to create art, and am willing to try any artistic technique at least once. I am particularly fond of artworks involving a lot of emotion and color. The purpose of my blog is for me to be open and honest with myself and the world about my attempts to grow as an artist. My other major passion is reading. My TBR pile is larger than I'll ever be able to read, and yet I can't resist adding to it on a nearly daily basis. I love to read science fiction & fantasy, graphic novels, and pretty much anything I can get my hands on. I have a couple of blogs, as you can see. One is primarily my photography, while the other are my book reviews. If you have any questions, feel free to reach out!
View all posts by Liz (AKA Cat) →
This entry was posted in ARC, Thriller, Uncategorized and tagged ARC Review, Book, Book Review, Books, Literary, Literature, Review, Thriller Review. Bookmark the permalink.