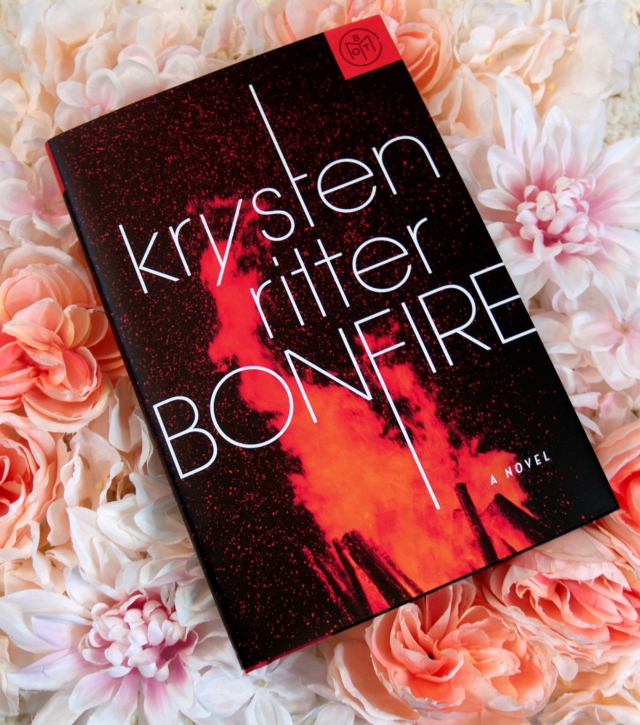 Bonfire is Krysten Ritter’s (you may know her as Jessica Jones from a series of the same name, on Netflix) debut novel. In my opinion actors turning authors is a bit of a hit or miss scenario, either they’re wonderful or they’re a flop. In this case I think Ritter managed to get her book on the side of hit, as I found myself greatly enjoying it (I read it all in one sitting).

Warnings first: There are a few different scenes that talk about animal death in this novel. The main character’s dog is murdered, and that fact (as well as some of the details) comes up quite a bit. There’s also some hunting scenes described. Along with those scenes is something called ‘the Game’ that the school boys did; getting pictures of girls in compromising positions and then sharing those photos. This is pretty alarming to say the least, and at least one suicide is mentioned as a direct result of it.

Bonfire is set in a small town named Barrens. It’s described as a company town, and that certainly is an accurate description; Optimal Plastics seems to own, pay for or employ more than half of everything in the town. And yet despite their size, they never seem to have even the smallest infraction on their records. That’s why Abby is in town, well, that’s why she says she’s in town. It’s her job to make sure Optimal Plastics isn’t contaminating the town’s water source. Getting the townspeople to listen to that is a whole different story though.

Throughout the novel the history of Barrens is slowly revealed. Optimal Plastics has been buying their way into the town for years, slowly leaking corruption as it goes. A group of girls pretend to be sick, the ringleader named Kaycee. Abby has her doubts about how fake the whole thing was, but nobody seems willing to humor her theories. As Abby digs deeper to unravel the mystery of her past, she starts turning up more and more unexpected bits of information.

Abby is an interesting character; she’s clearly traumatized and obsessed with her past, and frankly who can blame her? Most of the people in town were pretty horrible to her when she was younger, even more so than they were to each other (which is saying something). Her father hid from his loss and pain by diving into religion, leaving her alone. Her best childhood friend betrayed her, and in my opinion did some things that were pretty unforgivable (such as killing her dog). Despite all the pain she’s suffered, she’s come back to down, determined to figure out the cause of a strange series of events that happened when she was a teenager. I’m not sure I would have been able to do what she did. Abby also delivers one of my favorite lines during the novel (“Worse. I’m a lawyer.”); which helps to show how she can appreciate the humor in her situation and in her job, a helpful attribute to have to say the least.

Bonfire is very heavily character driven; nothing in this story would have happened (or rather, been revealed), had Abby not stuck to her guns and continued onward. It’s her obsession with Kaycee and the past that resolves the mystery of Barrens (the mystery nobody would look at). I found this story to be a refreshing change of pace.

As debut novels go, Bonfire was pretty decent. I can’t wait to see if Krysten Ritter continues with her writing career, and if so, what she comes out with next.

I am an avid animal lover, photographer, graphic designer, and much more. I love to create art, and am willing to try any artistic technique at least once. I am particularly fond of artworks involving a lot of emotion and color. The purpose of my blog is for me to be open and honest with myself and the world about my attempts to grow as an artist. My other major passion is reading. My TBR pile is larger than I'll ever be able to read, and yet I can't resist adding to it on a nearly daily basis. I love to read science fiction & fantasy, graphic novels, and pretty much anything I can get my hands on. I have a couple of blogs, as you can see. One is primarily my photography, while the other are my book reviews. If you have any questions, feel free to reach out!
View all posts by Liz (AKA Cat) →
This entry was posted in Fiction, Mystery, Thriller, Uncategorized and tagged Book, Book Review, Books, Literary, Literature, Mystery, Review, Thriller Review. Bookmark the permalink.