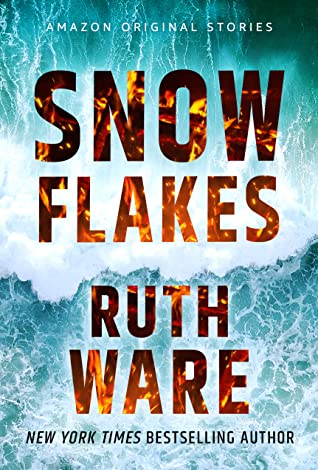 Snowflakes is the first in a series of six short stories, known as the Hush Collection. Written by Ruth Ware, I just knew that I had to give this novella a try.

Father has always spoken of the war – the one that was heading their way. So when he ripped up their lives and took them to an isolated island, Leah never questioned it. Never questioned him. Now, she’s seeing her father’s sanity crumble, and her family with it.

This short story, despite the description, was nothing like what I expected it to be. Snowflakes was deeply emotional, concerning, and at its core had a deep sense of foreboding to it.

Snowflakes is unlike anything else that Ruth Ware has written, and for a variety of reasons. First, there’s the length itself. This is the shortest thing I’ve read by Ware, and while she did a good job, that obviously altered the way she unveiled what occurred.

Then there’s the subject matter itself. It did read like a thriller, mostly thanks to the way Ruth Ware writes. It was also deeply depressing in more than one spot, and with good reason. This is a quick read, but it is not a light read. Not by any means.

If I had to label it, I’d say it was a bit of a psychological thriller, though even that doesn’t feel like the perfect fit. It felt almost too human for that, if that makes any sense. Still, it was a worthwhile read, even if it did give me the chills.

I’ll be honest here: I’m not entirely certain I’m going to read the rest of this collection. It’s not that I’m uninterested, more like I read the one that really drew me in. I might take some time to read the other five stories in Hush, but only after I’ve gotten some other reading done (my TBR pile is massive at the moment).

I am an avid animal lover, photographer, graphic designer, and much more. I love to create art, and am willing to try any artistic technique at least once. I am particularly fond of artworks involving a lot of emotion and color. The purpose of my blog is for me to be open and honest with myself and the world about my attempts to grow as an artist. My other major passion is reading. My TBR pile is larger than I'll ever be able to read, and yet I can't resist adding to it on a nearly daily basis. I love to read science fiction & fantasy, graphic novels, and pretty much anything I can get my hands on. I have a couple of blogs, as you can see. One is primarily my photography, while the other are my book reviews. If you have any questions, feel free to reach out!
View all posts by Liz (AKA Cat) →
This entry was posted in Thriller, Uncategorized and tagged Books, Fiction, Hush Collection, Literature, Review, Ruth Ware, Snowflakes, Snowflakes (Hush Collection) by Ruth Ware, Snowflakes by Ruth Ware, Thriller, Thriller Review. Bookmark the permalink.