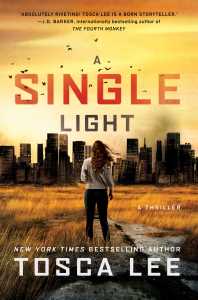 I received a copy of A Single Light through NetGalley in exchange for a fair and honest review.

A Single Light is the second novel in Tosca Lee’s The Line Between series. A Single Light is a dystopian thriller, and it’s as chilling and memorable as you might expect. This is where Tosca Lee excels in writing. And here’s hoping we’ll see more of it.

The country has been ravaged by disease. Wynter and Chase took to living in an underground bunker in order to avoid the worst of it. But even with the dark lives they once lived, they were not prepared for what they found when they came back up top.

What follows is a true dystopian novel, as Wynter and Chase desperately search for medicine in a destroyed wasteland that was once their home. And they must race against the clock in order to find this medicine – before it’s too late for their friend.

“I miss the sky. The feel of wind – even when it carries the perfume of a neighboring pasture. The smell of coming rain.”

A Single Light was an intense and thrilling read. But it was also oddly beautiful, showing off some of the best of what humanity has to offer, all while the world is falling apart. I’m blown away by Tosca Lee’s writing here.

I should probably confess that I never actually read the first novel in this series, The Line Between. But despite that, I had absolutely no trouble following along. Lee’s refresher at the beginning of A Single Light was enough to get me through.

And once I was emotionally invested in this novel, I wasn’t willing to put it down. I’m sure I missed out on some details and context. But I’m also really glad that I read this book anyway (though I will be adding The Line Between to my TBR list).

Wynter and Chase’s quest through this decimated country was a fascinating one. It lived up to its genre, being truly thrilling. It was depressing at times, naturally. But it was oddly uplifting. I’m going to give credit to Wynter’s character for that.

I don’t normally find myself saying this…but I kind of want to see A Single Light made into a movie. Because this is exactly what I want out of a dystopian thriller novel, and thus I really do think it’d make an excellent movie (just so long as they stay true to the premise, of course).

I really enjoyed A Single Light, and will be curious to see what will be Tosca Lee’s next big project. Though I’m not giving up hopes about an adaptation for this novel.

I am an avid animal lover, photographer, reader, and much more. While my photography blog is feeling a bit neglected at the moment, the other sites I'm involved in are going strong. ✧I review books, comics, and basically anything else in the literary world over at Quirky Cat's Fat Stacks (of Books). ✧I review comics and books, as well as write content for Word of the Nerd. ✧I review comics for Monkeys Fighting Robots. ✧I write content for Screen Rant and CBR. ✧I write book reviews for The Review Crew.
View all posts by Liz (AKA Cat) →
This entry was posted in Dystopian, Uncategorized and tagged A Single Light, A Single Light by Tosca Lee, Book, Book Review, Books, Dystopian, Dystopian Review, Fiction, Howard Books, Literature, Net Galley, NetGalley, Review, The Line Between #2, Tosca Lee. Bookmark the permalink.