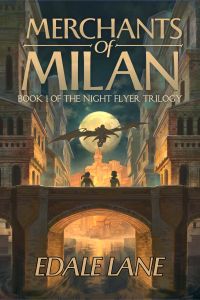 I received a copy of Merchants of Milan in exchange for a fair and honest review.

Merchants of Milan is Edale Lane’s latest novel, and is the start to the Night Flyer Trilogy. It’s a historical fiction novel, full of twists, passion, and drama.

Set in 16th century Italy, this is a tale of love, revenge, and adventure. Florentina has set herself on the path for revenge. It was a choice she made upon the murder of her father. However, her heart may have other opinions on the matter.

It turns out that even when one is determined to get revenge, you can still fall in love. But love won’t stop Florentina for masquerading around as the Night Flyer. Nor is she the only one who has experienced loss at the hands of her enemies.

“What difference would it make if a mere daughter suspected anything was amiss? He expelled a breath of contentment as he watched his brother carry the dying man out.”

Merchants of Milan was a beautifully woven story. This may be the first novel I’ve read by Edale Lane, but consider me hooked. Her writing is flawless, as is her inclusion of several different and complex themes.

I know I say this a lot, but Merchants of Milan was such a quick – yet delightful – read. It seemed like I had just settled in to read it when I turned to the last page. That’s how enthralling this read was.

Perhaps my favorite part about this novel (aside from the representation) would have to be the perspective and insight. Lane doesn’t shy away from showing the biases and flaws of the past, and in fact, manages to make her novel stronger for their inclusions. It was brilliantly done.

The characters were complex, and even though they were in situations that many of us would hope to avoid, there was something so undeniably human about them. It made it thrilling to read about them (especially Florentina, for obvious reasons) and their tales.

I think the best part about the characters, namely Florentina and Madelena, was that Lane portrayed the smaller and beautiful moments as well. These were characters in an epic situation, but they still had room to be kind and sweet.

Another surprising delight of this novel? All of the inventions and items mentioned are actually based on possible designs and inventions (courtesy of da Vinci for most). That was an excellent touch and allowed for a sense of whimsy that didn’t break immersion.

I’ll confess that there were a few moments that I found myself more anxious than not. I adored Florentina and Madelena, and given the time period this novel was set in, I had good reason to be concerned about what would happen to them. But honestly? Even with that anxiety lurking in the background, this was a read well worth the time.

Merchants of Milan was a thrilling novel, one that I thoroughly enjoyed from start to finish. I’m looking forward to seeing more information about the next two novels in this trilogy!

I am an avid animal lover, photographer, reader, and much more. While my photography blog is feeling a bit neglected at the moment, the other sites I'm involved in are going strong. ✧I review books, comics, and basically anything else in the literary world over at Quirky Cat's Fat Stacks (of Books). ✧I review comics and books, as well as write content for Word of the Nerd. ✧I review comics for Monkeys Fighting Robots. ✧I write content for Screen Rant and CBR. ✧I write book reviews for The Review Crew.
View all posts by Liz (AKA Cat) →
This entry was posted in ARC, Blog Tour, Fiction, Uncategorized and tagged Blog Tour, Blog Tour & Review, Book, Book Review, Books, Edale Lan, Fiction, Fiction Review, Literature, Merchants of Milan, Merchants of Milan by Edale Lane, Night Flyer Trilogy #1, Past and Prologue Press, Review. Bookmark the permalink.