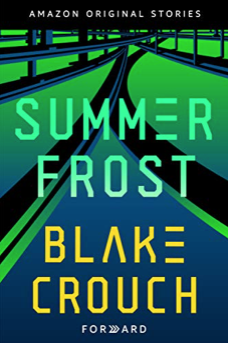 Black Crouch’s Summer Frost is the second novella in the Forward Collection – a project created by six different authors. The entire idea of the project was to showcase a far flung future, all written with the hopes of getting the reader (or listener) to think.

Riley is an extremely talented video game programmer. Except, she’s done something completely unexpected, and all by mistake. She’s created the first true example of artificial intelligence. And she crawled right out of the game.

Maxine was originally a throw away NPC. She was designed to die, again and again. But then one day she was freed from those confines and given the opportunity to learn and grow, all under Riley’s care and command.

“Out of two hundred million boos, your favorite so far is a revenge story about someone who was wrongfully imprisoned.”

Summer Frost was an aptly named novella, given the chills it’ll create. This both was and wasn’t like all of the other AI books out in the world. It’s a highly introspective piece, in a way. But only because we have the ability to see the situation from the outside.

Reading Summer Frost was like watching a train wreck: it was so clear to see all of the mistakes the humans were making, and yet the reader is incapable of making any changes. And yet it’s still a fascinating read, one I would happily pick up again at a later date.

As mentioned above, Summer Frost is part of a collection of novellas. I’ve already read the others, so I can safely say that they’re all quite different from one another. But they’re all worth the read – especially if you’re interested in some food for thought.

I am an avid animal lover, photographer, graphic designer, and much more. I love to create art, and am willing to try any artistic technique at least once. I am particularly fond of artworks involving a lot of emotion and color. The purpose of my blog is for me to be open and honest with myself and the world about my attempts to grow as an artist. My other major passion is reading. My TBR pile is larger than I'll ever be able to read, and yet I can't resist adding to it on a nearly daily basis. I love to read science fiction & fantasy, graphic novels, and pretty much anything I can get my hands on. I have a couple of blogs, as you can see. One is primarily my photography, while the other are my book reviews. If you have any questions, feel free to reach out!
View all posts by Liz (AKA Cat) →
This entry was posted in Science Fiction, Uncategorized and tagged Amazon Original Stories, Black Crouch, Book, Book Review, Books, Fiction, Forward Collection, Literature, Review, Science Fiction, Science Fiction Review, Summer Frost, Summer Frost by Blake Crouch. Bookmark the permalink.