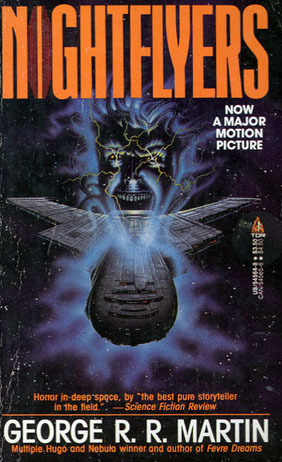 Nightflyers is a novella written by George R.R. Martin back in 1985. It’s recently been getting a lot more attention though, because of the Syfy TV series that was made. Out of curiosity, I watched the whole first season (which now sounds like it’ll be the only season) and then read the novella.

First of all, I can tell you that they changed a ton between the two. But I’m not here to review all the changes, so I’m going to do my very best not to ramble on about that. Promise. Honestly though, I think my biggest surprise about the decision making was that they wanted multiple seasons out of a novella – at that point we’re guaranteed for them to go off the rails.

Nightflyers is dark science fiction, set in a far future when humanity has taken to the stars. It’s got a strong foundation to work with, plus it had George R.R. Martin writing it. So it had a lot going for it, on the whole.

Nightflyers is an interesting concept. Part of me wishes that it had been a novel instead of a novella, because it felt like there were a lot of potential areas that could have been explored or expounded upon.

I really enjoyed the tone of the novella, it was dark and always felt like we never truly knew what was going on. I even liked the concept of the Nightflyer itself: an automated ship where frequently the only person on board is the captain. It’s unique, and the reason behind the circumstances even more so.

The crew’s behavior was a bit off-putting at times, but I honestly think a lot of that might have been intentional. You know how it goes in dark fantasy/horror series, some of the characters are designed to be disliked so we don’t feel bad when they die. I think that was the intention here, but I could be wrong.

The Captain was probably the most interesting, with obvious intention behind that. I promised that I wouldn’t compare the two overly much, but I will say that I liked Royd and his backstory more in the novella than in the TV series. I would have actually loved for more time to be spent on his character. Maybe have the story start before the rest of the science crew gets on board? Something like that.

I loved the mystery of the volcryn, though I’ll confess that I was somewhat…disappointed by the truth of what they were. But that’s life, we don’t get everything the way we want it sometimes, so in a sense it made the weight of it feel more real.

This wasn’t my favorite writing by George R.R. Martin, but I wouldn’t go so far as to say that I didn’t like it either. I appreciate the unique nature to the story, if nothing else. And of course we have to remember how early this was in his career, comparatively speaking.

I am an avid animal lover, photographer, reader, and much more. While my photography blog is feeling a bit neglected at the moment, the other sites I'm involved in are going strong. ✧I review books, comics, and basically anything else in the literary world over at Quirky Cat's Fat Stacks (of Books). ✧I review comics and books, as well as write content for Word of the Nerd. ✧I review comics for Monkeys Fighting Robots. ✧I write content for Screen Rant and CBR. ✧I write book reviews for The Review Crew.
View all posts by Liz (AKA Cat) →
This entry was posted in Science Fiction, Uncategorized and tagged Book, Book Review, Books, George R.R. Martin, Literature, Nightflyers, Nightflyers by George R.R. Martin, Review, Science Fiction. Bookmark the permalink.