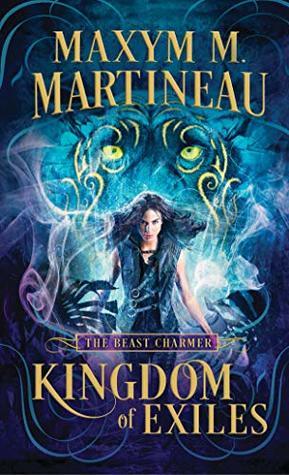 I received a copy of Kingdom of Exiles through BookishFirst in exchange for a fair and honest review.

Kingdom of Exiles is the first novel in a new series called the Beast Charmer by Maxym M. Martineau. I’m not going to lie to you – it was originally the cover art that caught my attention. That being said, this novel exceeded all of my expectations, and so much more. It’s described as Fantastic Beasts meets Assassin’s Creed, and it delivers on that promise.

Leena is a beast charmer, even if she is an exiled and disgraced one. Framed for committing a crime she had nothing to do with, Leena is forced to commit one of the biggest sins to beast charmers. She has to sell her beasts to make a living. Through this way of living, Leena finds herself in an even more dangerous situation, one full of treachery and assassins.

The description of this novel had me sold, and with good reason I think. That being said, having read it. I feel like the description doesn’t do the novel justice. Because I absolutely loved this book. I’m so sad that it’s over, though the fact that it’s a first in the series has helped keep my spirits up.

Warnings: Kingdom of Exiles has animal (beast) death inside, as well as kidnapping and torture. They all fit in well with the plot at hand, and more often than not you can see these moments coming ahead of time. So you can prepare yourself if needed.

Kingdom of Exiles was such a thrilling read. I loved nearly every moment, and I happily read the entire thing in one sitting. I just couldn’t put it down. The world described in these pages was lush, and I found myself wanting to know more and more about it.

I knew I wanted to read Kingdom of Exiles from the moment it was compared to Fantastic Beasts. And I’m not ashamed to admit that. That being said, this novel exceeded my hopes, throwing in a bit of a Pokemon vibe along the way. In that respect, this novel was a ton of fun. I wouldn’t have minded seeing more of the beast charming elements, but I’m sure it’ll come up in later novels.

That being said, I went into this novel with certain expectations. I sort of expected that I wouldn’t like Leena, because of the whole selling beasts bit. So I was shocked when I found myself enjoying her character, and sympathizing with her situation. It was all very well done.

Noc’s character was likewise interesting, and admittedly I think I grew to like him even faster than I did Leena. I have so many questions about his past – questions that the novel did a good job of dancing around. I’m hoping we learn more about him in the next novel.

I found this novel to be very fast-paced, but in a good way. All of the beautiful creatures, and the beast charming in general, were fascinating. I would have loved to see more, of course. But I really enjoyed what I did see; Leena trying to match the beasts with the best person for them, and so on.

The treachery in Leena’s past…it was dark, and made for a brilliant driving force in Leena’s life, as well as in Kingdom of Exile. I’ll be curious to see how Maxym M. Martineau follows it up in later novels in the series. Which unfortunately I have to wait for. Even though I’m really looking forward to learning more about the two main characters, especially now.

I am an avid animal lover, photographer, reader, and much more. While my photography blog is feeling a bit neglected at the moment, the other sites I'm involved in are going strong. ✧I review books, comics, and basically anything else in the literary world over at Quirky Cat's Fat Stacks (of Books). ✧I review comics and books, as well as write content for Word of the Nerd. ✧I review comics for Monkeys Fighting Robots. ✧I write content for Screen Rant and CBR. ✧I write book reviews for The Review Crew.
View all posts by Liz (AKA Cat) →
This entry was posted in ARC, Fantasy, Uncategorized and tagged Book, Book Review, BookishFirst, Books, Fantasy, Fiction, Kingdom of Exiles, Kingdom of Exiles (The Beast Charmer #1), Kingdom of Exiles (The Beast Charmer #1) by Maxym M. Martineau, Literature, Maxym M. Martineau, Review, Sourcebooks Casablanca, The Beast Charmer #1. Bookmark the permalink.