Review: The Girl in Red by Christina Henry 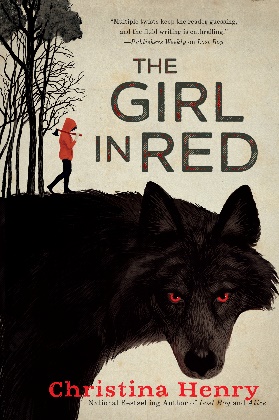 I received a copy of The Girl in Red through NetGalley in exchange for a fair and honest review.

The Girl in Red is the latest warped fairy tale from the mind of Christina Henry. And man does it hold up to all of my expectations. As you can probably guess from the title, this is her own rendition of Little Red Riding Hood.

If you’ve ever wanted to see Little Red Riding Hood in a post-apocalyptic setting, then you’re in luck! That’s the core of this novel, though there are so many other layers to be found in this novel. It’s rich and dark and so so delightfully disturbing. In short, it’s perfection.

Red is just a teenage girl. One who has always been paranoid, prone to thinking ahead, and planning for the worst. Luckily all of those attributes made her more likely to be prepared to survive an apocalypse. Though maybe she wouldn’t consider herself so lucky.

Warnings: The Girl in Red is an amazing novel, but it also covers some of the worst of humanity. There is a firm belief that the worst parts of human nature come out to play when shit hits the fans – and frankly, I understand where that comes from. Also, this novel may not be best for anyone that has a phobia surrounding illness or disease. There are detailed accounts included, and it may be disturbing for some.

The Girl in Red was a whirlwind of a read. It’s full of rich details and fascinating characters, all of whom support this amazing disturbing and detailed plot. I just couldn’t get enough of it! To be honest, I was really quite sad when I hit the end of this book. Not because it felt incomplete, but because I just wasn’t ready to say goodbye yet.

This novel is a blend of so many different things. It’s a post-apocalyptic story, of course. But it’s also a tale of survival. A tale of learning to trust. A tale of grief, loss, and coming to terms with the past. In a way, it’s even a redemption story.

This had to be one of the most chilling plots I’ve read in some time. The creeping feeling that comes from reading some of the details…it was almost too much at times. It was fascinating to see Red try and uncover the truth behind what was happening, while also keeping herself alive along the way.

I love that Red was such a realistic character. Yes, she’s missing part of her leg. No, that doesn’t slow her down. She’s survived against all of the odds, doesn’t that say enough about her and her will to live? She’s so impressive, but she’s also very human, and thus flawed. She’s not perfect, but she is compassionate, determined, and so much more.

Another element that I loved was the decision to flip back and forth between two points in time. It really helped balance out the pacing. Plus it kept the tension building, allowing for Christina Henry to stop before a major revelation and jump to something else for a bit. Sometimes it made me want to pull out my hair – but it certainly kept me reading!

Part of me is actually sad that this story is complete. I understand why this one couldn’t become a series, but in a way I would have liked to see exactly that. There were just so many elements in this story that I loved so much. Regardless, I’m looking forward to seeing what Christina Henry comes up with next!

I am an avid animal lover, photographer, reader, and much more. While my photography blog is feeling a bit neglected at the moment, the other sites I'm involved in are going strong. ✧I review books, comics, and basically anything else in the literary world over at Quirky Cat's Fat Stacks (of Books). ✧I review comics and books, as well as write content for Word of the Nerd. ✧I review comics for Monkeys Fighting Robots. ✧I write content for Screen Rant and CBR. ✧I write book reviews for The Review Crew.
View all posts by Liz (AKA Cat) →
This entry was posted in ARC, Dystopian, Fantasy, Uncategorized and tagged Berkley, Book, Book Review, Books, Christina Henry, Fantasy, Fiction, Literature, Net Galley, NetGalley, Review, The Girl in Red, The Girl in Red by Christina Henry. Bookmark the permalink.