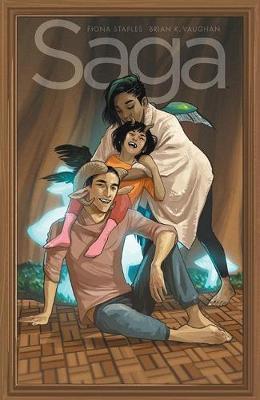 This is the last volume of Saga to come out for at least a year. The creative team will be taking a short, year (ish) long break. Considering that they’ve all been working on more than one project, and that this one alone has been running for years, I can’t really blame them for wanting a break. Still I’m sure any fan was worried going into this that the last page would be either devastating or a cliffhanger (which in this case would also be devastating).

I didn’t end up reading Saga on the release date, because I felt like that would just be a mean thing to do to myself on a Tuesday. The series hasn’t exactly been kind to my heart in the past. I think it was probably the best call, because it seemed to reduce my anxiety for the worst while I was reading. That alone probably made it worth it.

Every time I start a new series by Brian K. Vaughan I promise myself that this time I won’t get too attached to his characters. And every single time I break that promise to myself. Sometimes it ends with heartbreak, as a beloved character passes away. Sometimes it gives me moments of joy, seeing the characters I care about succeed in their goals. The emotional investment is always worth it in the long run, because for good or for bad, it creates an intense and well written series.

This is one of those times where if you don’t want spoilers then you really should stop reading now. I’m going to do my best to not name names for anything, but I am going to talk honestly about how this volume made me feel, which may have implied spoilers with it. So consider yourself warned.

This volume ripped out my heart and stomped all over it. Seriously, I didn’t things could get any worse after Marko and Alana lost their child, but I was so terribly wrong. I think the worst part about it all is the level of betrayal I feel. I was rooting for that character to be free! I wanted him to get lose and save the day. But instead he just added to the bloodbath. Hell, he was the bloodbath, without having the dignity to die himself.

I like to try and see the best in people, I really do. That applies to the characters in the books and comics I’m reading. Okay, that’s not completely true. I hate Ianthe with a burning passion. There is no redemption for her character, as far as I’m concerned (killing dogs and lying cats is going far beyond any realm of called for violence). What I’m trying to say is that I enjoy rooting for the underdog, and I absolutely adore redemption stories. If you’re up to date with the series than you can probably guess whose redemption story I’m talking about here. It did not go as I planned. I’ll leave it at that.

I do love how Vaughan has a way of making unlikable characters endearing over time. I never would have guessed that I’d end up growing fond of PR-IV. I certainly never expected to end up shipping his and Petri’s relationship (it’s cute and they need love and affection in their lives). To a lesser extent I never expected to be so worried about Squire, but this volume proved even that bit wrong.

I think I have a love/hate relationship with Brian K. Vaughan’s writing style. I love that he uses death not as a trope or a hammer, but as an actual way of advancing the plots and other character’s developments. The flipside is I absolutely hate seeing characters I love end up dead. I know he’ll always kill characters in his series…yet I’m always surprised when it happens. I think it’s because it’s so close to real life – where there’s no warning or reason for it sometimes. It just happens.

I’m sad that I have to wait a year for the next volume, but I also think I’m coming to terms with it as well. For one thing it’ll give me time to recover from some of the blows that happened here, and for another it might give me a chance to catch up in another series or two (or more likely, knowing me, I’ll pick up another series or two by the creative team to help with the wait). Either way, we don’t much have a choice in the matter, so we might as well make the best of it.

I am an avid animal lover, photographer, reader, and much more. While my photography blog is feeling a bit neglected at the moment, the other sites I'm involved in are going strong. ✧I review books, comics, and basically anything else in the literary world over at Quirky Cat's Fat Stacks (of Books). ✧I review comics and books, as well as write content for Word of the Nerd. ✧I review comics for Monkeys Fighting Robots. ✧I write content for Screen Rant and CBR. ✧I write book reviews for The Review Crew.
View all posts by Liz (AKA Cat) →
This entry was posted in Fantasy, Image Comics, Uncategorized and tagged Book, Book Review, Books, Brian K. Vaughan, Comic, Comic Books, Fiona Staples, Graphic Novels, Image Comics, Literature, Review, Saga, Saga Vol. 9. Bookmark the permalink.