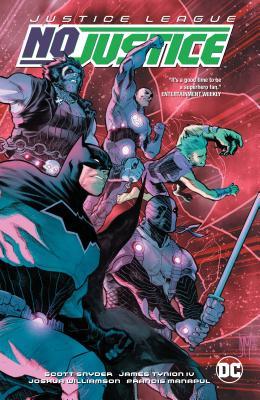 I received a copy of Justice League: No Justice through NetGalley in exchange for a fair and honest review.

If you’re a fan of massive team ups, then you’re in luck! Justice League: No Justice contains a huge cast of characters, including: Batman, Wonder Woman, Robin, Superman, The Flash, Cyborg, Nightwing, Starfire, Raven, Beast Boy, Harley Quinn, Deathstroke, Starro, Brainiac, Lobo, the Green Lantern Corps even make an appearance. There are many more that I’m sure I’ve failed to mention.

I love watching character interactions, especially when they’re not normally in that particular team-up, so I was really looking forward to No Justice. Additionally I’ve been reading Justice League Dark, which I’m pretty sure this volume sets up for. I wish I had read this first, but mistakes happen, right?

This is one of those (usually) rare moments where the good guys and the bad guys have to team up to save the world. These stories can be highly dramatic, which sprinkled with humor, thanks to the conflicting nature of the characters involved. No Justice was no exception.

Being that there are so many different characters to follow, as well as a rather unique plot, it was difficult at times to fully understand what was going on during  No Justice. Part of the problem is that I didn’t read the events leading up to this mess. I know it was Waller and her team (the Suicide Squad) that started it, but I don’t really know what their mission was or the endgame at all.

Since there was so much ground to cover, there was almost no time wasted on slow moments, and thus the pacing was very fast. This gave us a lot of information, and a lot of action. Considering that was pretty much exactly what I was hoping for from this, I can’t really complain.

I did love all the cameos that occurred during this volume. Some of the characters took more focus than others, but I think on the whole they balanced it out very well, giving most of the characters a chance to shine, or at least a moment to make a funny or snarky quip.

To be honest though, the best part about No Justice is how many of the villains stepped up and redeemed themselves, Starro especially…but at the end of the day Waller’s still a jerk (to put it kindly). She had no redeeming moment, and in fact she quite possibly caused half the problems in this plot…which sounds about right. Actually, I take that back. She totally is the root of most of the problems here. Go ahead and give her all the blame. She deserves it.

I wonder where this will lead to next. I have a feeling we’ll be seeing another universal threat coming out of this, but I just don’t know what (minus what is happening in Justice League Dark). I think it’ll end up affecting more than one series, but I could be wrong.

I am an avid animal lover, photographer, reader, and much more. While my photography blog is feeling a bit neglected at the moment, the other sites I'm involved in are going strong. ✧I review books, comics, and basically anything else in the literary world over at Quirky Cat's Fat Stacks (of Books). ✧I review comics and books, as well as write content for Word of the Nerd. ✧I review comics for Monkeys Fighting Robots. ✧I write content for Screen Rant and CBR. ✧I write book reviews for The Review Crew.
View all posts by Liz (AKA Cat) →
This entry was posted in Comics, DC Comics, Marvel, Uncategorized and tagged Book, Book Review, Books, Comic, Comic Books, DC Comics, Fiction, Graphic Novels, Justice League, Justice League: No Justice, Literary, Literature, Review. Bookmark the permalink.