Review: Bring Me Back by B. A. Paris 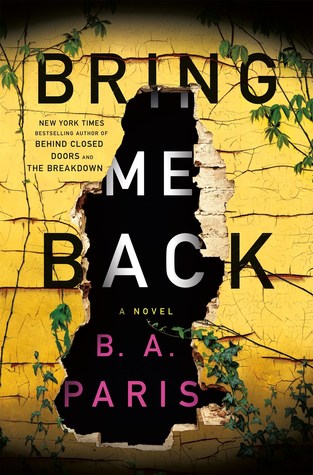 I received a copy of Bring Me Back from the publisher thanks to a contest. I don’t have to leave a review, but I am choosing to do so.

Bring Me Back is the latest in B. A. Paris’ thriller novels. What originally caught my attention (and was the reason I saw/entered in that contest) was the cover. It’s striking. I don’t think I’ve seen a lot of thriller novels make such wonderful use of yellow and black like that. The silhouette was a perfect touch too, especially considering the implied subject from the title.

Have you ever picked up a novel and been sucked into it right from the start? That happened to me with Bring Me Back. It immediately pulled me into it, and I just couldn’t look away. Like many thrillers, this one starts off with a tragedy. While we can tell it’s being told at a later date, the intensity of the moment pulls us in right from the start. Finn, the main character has lost his girlfriend. Or more accurately put, his girlfriend has gone missing.

From there things go back and forth, between the past and the present. They’re really easy to tell apart though. The past events are written almost as if in a letter, which is really interesting and a nice touch.

Together the past and the present build up a series of events, slowing telling us more and more of the truth for what actually happened that fateful night. It quickly becomes clear that not everything is what it seems, but more on that later.

Finn is an interesting sort of character. In some ways I liked him, and in other ways I couldn’t stand him. There were moments where he came off as being unbearable creepy or controlling, other times charming and passionate. Sometimes he was aggressive, and other times a coward. Other times he was closed to the world, even those that he should have been holding closest to him. Seeing how he was behaving versus what he was thinking allowed us some additional insight, but it was still difficult to ignore how the people around him must have been feeling. On the whole I think I’d have to say that I wouldn’t have liked Finn, had I met him in person. But that’s okay; I don’t think I needed to like Finn to feel invested in his story.

I will say that I was disappointed in how everything ended. For one thing I think the introduction was so much stronger than the conclusion. For another I felt, to put it simply, cheated. There was no way I could have figured out what happened here, as the truth was intentional obfuscated and warped. I also didn’t love the use of a couple of psychological clichés at the end (I’m trying to be vague because I don’t want to give away the big reveal). It felt cheap to me.

Other than the conclusion I really did enjoy this book. There were lots of moments that built up the anxiety and intensity of the situation, hitting those perfect notes that one can only hope for from thrillers. I also really loved the writing style and quality, which are huge bonuses in my book.

I am an avid animal lover, photographer, graphic designer, and much more. I love to create art, and am willing to try any artistic technique at least once. I am particularly fond of artworks involving a lot of emotion and color. The purpose of my blog is for me to be open and honest with myself and the world about my attempts to grow as an artist. My other major passion is reading. My TBR pile is larger than I'll ever be able to read, and yet I can't resist adding to it on a nearly daily basis. I love to read science fiction & fantasy, graphic novels, and pretty much anything I can get my hands on. I have a couple of blogs, as you can see. One is primarily my photography, while the other are my book reviews. If you have any questions, feel free to reach out!
View all posts by Liz (AKA Cat) →
This entry was posted in Thriller, Uncategorized and tagged Book, Book Review, Books, Fiction, Fiction Review, Literary, Literature, Review, Thriller. Bookmark the permalink.