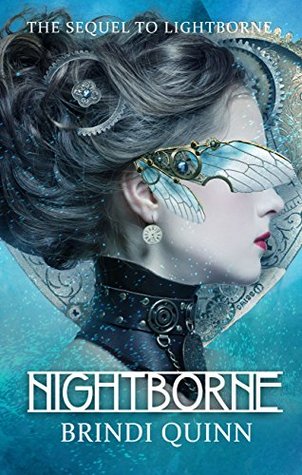 Nightborne is the highly anticipate sequel to Lightborne, but that was probably at least somewhat obvious thanks to the titles. Still, I’m sure fans of Brindi Quinn (like myself) were relieved for the release of this story. We’ve been waiting a hot minute to find out what was going to happen next to our sweet quirky Bex.

You know those novels that shock you by how much emotion they’re able to drag out of you? Nightborne did that to me. There were times I found myself chuckling, highlighting a poignant quote, or even crying depending on what was happening. And yes, I really did cry. A few times. But it was so worth it.

I’ve said it before and I’ll say it again, there are two things that Brindi Quinn really excels at; character creation/development and world building. The world was already very well established in Lightborne, which left Brindi Quinn more room to focus on her characters and their development.

Bex isn’t your ordinary main character. She’s quirky and flawed and while you probably couldn’t call her human, she’s one of the most human characters I’ve read about in a long, long time. She’s not some stoic character that accepts herself as the hero and plunges headfirst into the fray, caring not if she lived or died. She’s constantly conflicted and tortured by what she does and doesn’t know, never knowing which action will hurt the people she cares about, and which is the right move to make. It’s impossible not to sympathize with her and her predicaments.

What I love about Bex is how easy it is to underestimate her. She acts silly and likes to have fun, sure, but that doesn’t mean she’s incapable of thought or caring. Her actions reveal the truth of that statement. Seeing her grow as a person during this novel was truly breathtaking. While she may have been in circumstances that were extraordinary, her responses to said situation was perfectly human and so well written.

To be honest I really wasn’t sure how Quinn was possibly going to able to follow up Lightborne. It’s my favorite of her series (which is saying something) and the climatic conclusion was a lot to take in. But she did it. I said it earlier in this review, but Nightborne did a wonderful job of getting me to care about the characters and about what was happening to the world itself.

I was rooting for Bex and her team. I was also very conflicted about who to ship this time around, something that I’m sure was intentional. I laughed for Bex, I cried for Bex, and I hoped for Bex. This novel will emotionally gut you and make you say ‘thank you’ when it’s all said and done. So get ready for an emotional roller coaster, because trust me, it’s worth it.

In a way I’m sad to see the conclusion of this plot. It’s like losing a dear friend. Sure, I can (and probably will) go back and read it dozens of times, but it’ll never be like the first read through. I think we all have series out there that particularly resonate with us, and for me is was the Lightborne duology.

I am an avid animal lover, photographer, graphic designer, and much more. I love to create art, and am willing to try any artistic technique at least once. I am particularly fond of artworks involving a lot of emotion and color. The purpose of my blog is for me to be open and honest with myself and the world about my attempts to grow as an artist. My other major passion is reading. My TBR pile is larger than I'll ever be able to read, and yet I can't resist adding to it on a nearly daily basis. I love to read science fiction & fantasy, graphic novels, and pretty much anything I can get my hands on. I have a couple of blogs, as you can see. One is primarily my photography, while the other are my book reviews. If you have any questions, feel free to reach out!
View all posts by Liz (AKA Cat) →
This entry was posted in Fantasy, Uncategorized and tagged Book, Book Review, Books, Fantasy, Fiction, Fiction Review, Literary, Literature, Review. Bookmark the permalink.