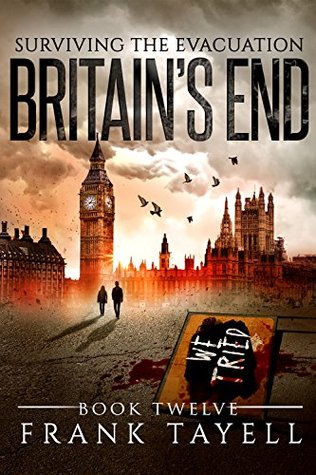 With this novel I am finally up to date with my Surviving the Evacuation series! Granted, I said the same thing last year, and before I knew it I was three books behind, so there’s that. Anyway, we know there’s going to be at least one more novel in the series, but beyond that it’s anyone’s guess. I’d like to see the series continue of course, but I also trust Tayell to know when it’s time to end it, so I think I’ll be okay with it either way (as long as he starts another series that is!).

This is the twelfth book in the series, so obviously I’d suggest against starting here (you’ll have no idea what’s going on or why particular characters are behaving/injured in certain ways). It’s hard to believe that this novel is set only nine months after the outbreak – it feels like it’s been ages (and I’m sure the characters would agree with that).  I love the steady and detailed pace Tayell has taken with this series.

Like the last novel, Britain’s End jumps between multiple perspectives. Since I was more or less expecting it this time (since all of the characters introduced have now been introduced to each other) it wasn’t odd and actually ended up making sense for the series. Though I do wish they had spent more time with Bill and Chester (partially because he left them off on a bit of a cliffhanger – that will be covered in the next novel I’m sure).

You’d think after surviving the zombie apocalypse (and the resulting mutually assured destruction that occurred) that the people of Anglesey had seen the worst that human nature had to offer. You would be wrong. There are still plenty of hiccups, backslides, and dangers for our characters, with so many twists and turns it’s almost overwhelming.

The title obviously implies something here; that the reign of Britain is ending. We already knew from the last novel that the people of Anglesey will have to evacuate, and sooner rather than later (thanks to a nuclear power plant’s impending meltdown). This novel focuses more on that plight, as well as the debate for the survivors in London.

I understand why Nilda doesn’t want to give up on London – for so many years it was her home. Now it’s her only connection to her late husband, and the start of her son’s life. It resembled safety in a world where there’s no such thing, and became almost a symbol for her and many others. But the practical concerns really do outweigh the emotional ones. For example, even if the zombies do drop dead (dead again that is) tomorrow (which we don’t really have a solid confirmation on yet, I’m so curious!) there are still a lot of problems with London. How would they farm? The few grassy areas in London were destroyed during the horrific ‘evacuation’ (readers will understand that emphasis), and eventually the food that’s left in the city will go bad (if it hasn’t already). They’re literally running on borrowed time.

Meanwhile things aren’t going too smoothly for Kim and the evacuation of Anglesey either (though I’m sure they’re smart enough to not call it an evacuation, after what they’ve been through). It seems like every time they take a step forward, they’re forced to take two steps back, and none of their plans, no matter how carefully they’re laid, seem to fully pan out. It’s rapidly hitting the point where the number of events going on cannot be considered a coincidence. First the grain, then the power plant, as well as the other events in this novel? Not to mention all the other events I haven’t even thought to list. It’s too much to be considered anything other than sabotage. It’ll be interesting to see where that whole plot ends up leading.

As mentioned above, I would have liked to see more of Bill and Chester in this novel. I’m sure they’re going to have more than their fair share of danger in their part of the plot, and I’m really anxious to see what happens. Not only are they in a dangerous situation, but they have a potentially deadly companion with them. That combination has me pretty worried, to say the least.

I’m hoping we start hearing information about the next novel soon, but I think that’s just the impatient side of me talking (after all, it hasn’t been that long since this one released). I’m just feeling a little antsy to see what happens next.

I am an avid animal lover, photographer, reader, and much more. While my photography blog is feeling a bit neglected at the moment, the other sites I'm involved in are going strong. ✧I review books, comics, and basically anything else in the literary world over at Quirky Cat's Fat Stacks (of Books). ✧I review comics and books, as well as write content for Word of the Nerd. ✧I review comics for Monkeys Fighting Robots. ✧I write content for Screen Rant and CBR. ✧I write book reviews for The Review Crew.
View all posts by Liz (AKA Cat) →
This entry was posted in Dystopian, Uncategorized and tagged Book, Book Review, Books, Dystopian Review, Literary, Literature, Review. Bookmark the permalink.