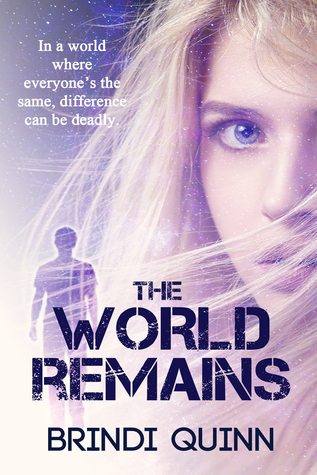 I received a copy of The World Remains in exchange for a fair and honest review.

Brindi Quinn has rapidly become one of my favorite Indie authors. I’ve read a few of her novels already, and all of them have been pretty amazing. They’ve also all been completely different from one another – an impressive feat, to say the least. I love how each world and set of characters are completely unique and stand out from the rest. I’ve only seen a few authors handle this as well as Quinn does, and it always impresses me.

The World Remains is an interesting sort of dystopian novel; we’re led to believe that Ashlin is one of ninety in a small commune; the rest of humanity having died out. They call themselves the Purites, and they all have similar features; fair hair and skin for starters. Of course, while Ashlin may look like the rest, it turns out she has some importance differences from them. Differences that she’s forced to keep secret, for her own safety.

The world that Ashlin lives in is in truth much more complicated than it appears. There are layers upon layers of deception, with only certain people being allowed to know that level of truth. It’s a convoluted mess, and is truly suited to the title of dystopian. How can society survive with that many barriers?

I loved Ashlin’s character. She’s a little naïve and maybe just a bit immature, but considering the life she’s lived, it’s hard to take that against her. And while she may be immature at times, she actually carries a heavy burden, and does so with dignity (well, most of the time). She’s stubborn, strong willed, feisty, and witty; a perfect combination of traits to survive the trials ahead.

Quinn does a wonderful job of including romances and love stories, without having them become overwhelming to the main plot. Of course I was rooting for the relationship to work out, but it was still refreshing to not have it completely derail the plot.

What really got me were the multiple layers of truth, as Quinn slowly revealed to us. First we start off with Ashlin’s understanding of the world, only to have that shattered. Then it just spirals outward from there, until we learn that even the world at large has been deceived by what is going on. The deception is bad enough, but when one considers all the lives lost at its expense…it’s pretty horrific.

The final series of twist at the end…well let’s just say it was really refreshing to be reading a novel where I couldn’t even remotely predict which way it was going to go, let alone how it was going to end. I certainly didn’t see the final revelations coming, though they made sense once I took the time to think about them.

While I believe The World Remains will be a standalone novel, I would absolutely love to see more from the world Quinn has built. Especially if it was to be a sequel – I want to see what happens next in this world. What changes will occur, and how everybody else will handle those changes. I’m content with what I’ve been given though, so if a sequel never occurs I’ll be okay (though maybe mildly disappointed).

I am an avid animal lover, photographer, reader, and much more. While my photography blog is feeling a bit neglected at the moment, the other sites I'm involved in are going strong. ✧I review books, comics, and basically anything else in the literary world over at Quirky Cat's Fat Stacks (of Books). ✧I review comics and books, as well as write content for Word of the Nerd. ✧I review comics for Monkeys Fighting Robots. ✧I write content for Screen Rant and CBR. ✧I write book reviews for The Review Crew.
View all posts by Liz (AKA Cat) →
This entry was posted in Dystopian, Fantasy, Uncategorized and tagged Book, Book Review, Books, Dystopian Review, Fantasy, Literary, Literature, Review. Bookmark the permalink.