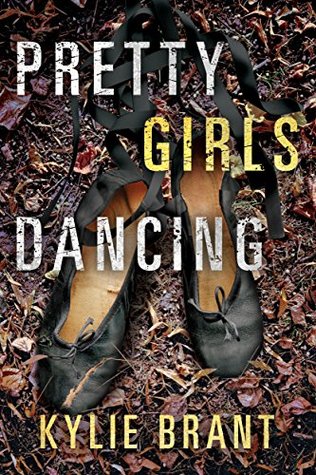 I received a copy of Pretty Girls Dancing from the Amazon First Reads program. There is no requirement for me to review this novel, but I am choosing to do so.

Pretty Girls Dancing is Kylie Brant’s latest novel, and is described as a dark thriller. A series of kidnappings/murders is devastating a small town and the families involved. The world is believed to be done by a serial killer called the Ten Mile Killer (TMK for short). The description made it all sound pretty interesting, and with there being no fantasy selections in the First Reads selection for the month, I figured why not? (Like I’m ever going to complain about a free book!).

Warnings first: Okay, so a lot of this is probably pretty obvious from the description of the novel. The TMK villain kidnaps and tortures little girls. While the torture is necessarily graphic, it is still very much torture. Bodies are found during the course of the novel, as is (spoiler warning) a surviving victim. While they don’t use the word, it’s very clear that she has been sexually assaulted by her TMK captor. I know these themes can be upsetting to many, so just be aware of them going in.

I actually think that Pretty Girls Dancing had a lot of potential, and a lot going for it. For starters, the name is unique (as far as thriller titles go, its pretty standout), and the cover is evocative. With just those two pieces of information we can gather that the victims of whatever crime is happening inside (and how could it be anything else?) are likely to be ballerinas or another form of dancers. Then there’s the actual plot; pretty interesting on the whole, but there were some flaws in the follow-through and conclusion. I do want to give credit for creativity however.

I respect that Brant wanted to design their own serial kidnapper/killer for this novel. However, I feel that with any threat of this nature there should probably be a lot more tension than I felt while reading this. Yes, of course I was concerned about Whitney (I never had any hope for Kelsey though, sorry), but that only stretched so far. At a certain point I was relieved when I thought I wouldn’t be reading from her perspective anymore – that is not to say that I wished she was dead, just that I didn’t want to keep going back to her POV. It was all either really traumatic of dreadfully slow with her, so I would have rather left it all out.

I’m conflicted about how I feel about the note Whitney found (not saying who left the note, for sake of spoilers). It reminded me very much of the climactic scene with Evey in V for Vendetta (the one recreating what V went through). Part of me liked this connection, the other part was disappointed that there wasn’t more to this scene; that the novel didn’t ‘own’ it, so to speak.

The reason I’m not giving this novel a higher rating than I am (because again, great bones for a story here) is because the pacing was pretty uneven throughout, and I was pretty disappointed with the ending, on the whole. The pace would fluctuate between being painfully slow and stilted to sudden bursts of action. But mostly it was the former.

As for the conclusion…dare I say it felt cheap? I don’t realistically see how the killer could have hidden the way he did (intentionally being vague for sake of spoilers). I know realism doesn’t always have to come into play with a thriller series, but I like it when they’re more believable than not.

Despite ending up not loving Pretty Girls Dancing, I will say that I found it memorable, and that I think I would like to keep an eye on Brant’s work in the future. I think she has a lot of potential, at least based off of the core plot I was seeing here. And I still absolutely love the title of this novel, so brownie points for that.

I am an avid animal lover, photographer, reader, and much more. While my photography blog is feeling a bit neglected at the moment, the other sites I'm involved in are going strong. ✧I review books, comics, and basically anything else in the literary world over at Quirky Cat's Fat Stacks (of Books). ✧I review comics and books, as well as write content for Word of the Nerd. ✧I review comics for Monkeys Fighting Robots. ✧I write content for Screen Rant and CBR. ✧I write book reviews for The Review Crew.
View all posts by Liz (AKA Cat) →
This entry was posted in Thriller, Uncategorized and tagged ARC Review, Book, Book Review, Books, Literary, Literature, Review, Thriller Review. Bookmark the permalink.