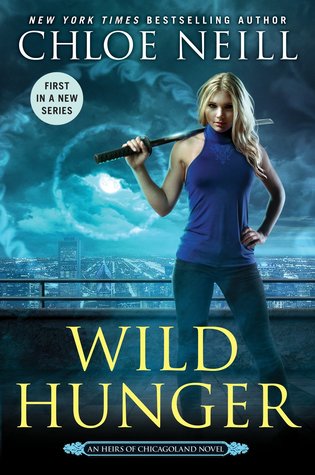 Wild Hunger is the first in a new series by Chloe Neill. But don’t worry, it is still connected to her famous Chicagoland Vampire series. There is no doubt that this is a spinoff series – so fans will be thrilled. That being said, it isn’t a bad starting point for new fans either. Which makes it the best of both worlds.

Elisa Sullivan is one of the most unique vampires in the world. She was born instead of made. But she’s gotten quite tired of being recognized for that fact alone. That’s why she left Chicago in the first place.

But Chicago has once again called her home. She’s here to help a peace meeting amongst European vampires – though things are looking shaky right from the start. A brutal assassination quickly alters the rest of the plans.

“I was the daughter of vampires, born because magic and fate twisted together.”

Wild Hunger was one thrill of a read. It was fast-paced, with lots of ups and downs and character development. And let’s not forget the tension between the characters. In short, this was a delightful read. One that is sure to please fans of Chloe Neill, while also probably drawing in a new crowd at the same time.

Thanks to the established world, it took no time for Chloe Neill to throw us right into the plot. All we needed to do was get to know the new leading lady; Elisa Sullivan. Elisa is an interesting character, for fairly obvious reasons. Her creation made her stand out, while all she really wants is the freedom to be herself. I feel like that’s something we can all sympathize with.

I’ll confess something to you guys here; I haven’t actually read the Chicagoland Vampire series. I know! It is on the list, I promise. But I figured I might as well give this new series a try, especially with the next book coming out shortly. And you know what? I have no regrets. I had zero problems following along and instead found myself enthralled by Neill’s writing style.

Naturally, I’m sure I missed some subjects from the previous series. But on the whole, I feel like Wild Hunger was very welcoming to new readers. So if you’re in the same boat as me; looking at this book and debating. Just give it a go. It’s worth it.

I love how all of the different supernaturals in this series interact with one another. We have vampires (obviously), werewolves, witches, and fae. And of course, there are different houses within the vampires. It’s all very complex, and I’m just dying to see more of that world.

The plot was both fun and intense, making for an easy read. I found myself incapable of putting this book down (that seems to happen to me a lot, huh?), and thus read it all in one day. It did make focusing on my work between reading a bit difficult…but that’s no surprise here.

Wicked Hour is expected to release in a little over a month (at the time of my writing this), and I’m already finding myself looking forward to seeing more of Elisa and Conner. And really, can you blame me there?

I am an avid animal lover, photographer, reader, and much more. While my photography blog is feeling a bit neglected at the moment, the other sites I'm involved in are going strong. ✧I review books, comics, and basically anything else in the literary world over at Quirky Cat's Fat Stacks (of Books). ✧I review comics and books, as well as write content for Word of the Nerd. ✧I review comics for Monkeys Fighting Robots. ✧I write content for Screen Rant and CBR. ✧I write book reviews for The Review Crew.
View all posts by Liz (AKA Cat) →
This entry was posted in Fantasy, Uncategorized and tagged Berkley, Book, Book Review, Books, Chloe Neill, Fantasy, Fiction, Heirs of Chicagoland #1, Literature, Review, Urban Fantasy, Wild Hunger, Wild Hunger by Chloe Neill. Bookmark the permalink.