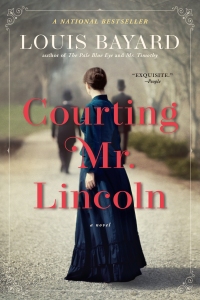 I received a copy of Courting Mr. Lincoln in exchange for a fair and honest review.

Courting Mr. Lincoln is a historical fiction novel that tells the story of Abraham Lincoln – but with a twist. This novel takes a deeper look at the people so pivotal in Lincoln’s life; Mary Todd and Joshua Speed.

Mary Todd is the woman that Abraham Lincoln would one day marry. That’s a story many history fans are well aware of. But what of her life leading up to their introduction? Or their time of the courtship itself? These are frequently overlooked parts of the story.

Then there’s Joshua Speed, the famous best friend of Lincoln. His story is yet another that has been slimmed down to a one-dimensional focus. That is what makes his half of this novel so breathtaking.

“I wasted time, and now doth time waste me.”

Courting Mr. Lincoln was simultaneously everything I had hoped for, and so much more. Not being a major history buff, I was nonetheless highly curious to see this unique take on such important and famous historical figures.

Thanks to school, we all know the basics of this story – or more accurately, the story to come. Yet there was something so beautifully human about seeing the story from an earlier point in time. For the first time ever it felt like the people in Lincoln’s life were given a chance to shine, and thus a chance to appear three dimensional. And so utterly human.

The book itself is a split perspective storytelling style. The chapters rotate back and forth between Mary Todd’s perspective, and that of Joshua Speed. It was fascinating trying to get into their heads, thanks to the insight of Louis Bayard.

I can tell you with complete honesty that I don’t typically read novels of this specific type – but there was something about the description that really attracted me to Courting Mr. Lincoln. I’m so grateful that I took the risk and read it, because it really did blow me away.

I’m saying that specifically because it always bothers me when the details surrounding a historical figure tend to get flattened over time. For example, Mary Todd is portrayed as a grieving mother and wife – and nothing more. So getting a chance to see a different side of her, an earlier telling before all the pain that bombarded her life – was refreshing and very much needed.

For that reason alone, I will forever be grateful for what Bayard attempted to do here. I appreciated his perspective and his insight. Though naturally, not being the best in history, I can’t speak much to the embellishments included, other than to say that they made these people easy to understand and connect with, which I imagine was the goal all along.

I am an avid animal lover, photographer, reader, and much more. While my photography blog is feeling a bit neglected at the moment, the other sites I'm involved in are going strong. ✧I review books, comics, and basically anything else in the literary world over at Quirky Cat's Fat Stacks (of Books). ✧I review comics and books, as well as write content for Word of the Nerd. ✧I review comics for Monkeys Fighting Robots. ✧I write content for Screen Rant and CBR. ✧I write book reviews for The Review Crew.
View all posts by Liz (AKA Cat) →
This entry was posted in Fiction, Uncategorized and tagged Algonquin Books, Blog Tour, Blog Tour & Review, Book, Book Review, Books, Courting Mr. Lincoln, Courting Mr. Lincoln by Louis Bayard, Fiction, Historical Fiction, Literature, Louis Bayard, Review. Bookmark the permalink.