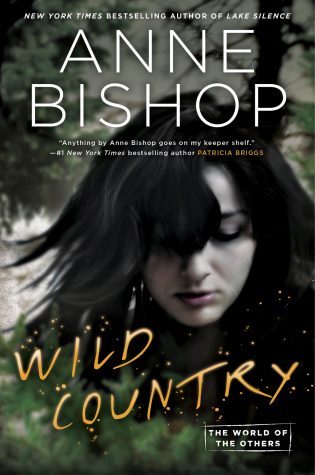 I received a copy of Wild Country through NetGalley in exchange for a fair and honest review.

This novel takes place in Bennett – it’s a town that has come up in previous novels. The one that got trashed by the Elders. Bennett has since become a mixed community, with terra indigene, Intuits, Simple Folk, and humans all in one place.  Based on events in the last few novels, we already know that this is a recipe for trouble.

I know not everyone loves that the last two books have included different characters, but I personally have really enjoyed seeing other parts of the world. It’s also been fun to learn more about characters related to the cast we already know.

Warnings: Like the novels before this one, there are a lot of heavy and sensitive subjects included. The blood prophets don’t play as big of a role in this one, but they do make an appearance, so there is some self-harming included. There are also kidnappings, torture, rape, and animal death. A lot of these scenes you can mostly see coming, but consider yourself warned.

Wild Country was an amazing and fast-paced read. I mean it when I say that I didn’t want to put this novel down. I wasn’t able to read it in one sitting, so I did have to cave and do exactly that. But my thoughts were constantly drawn back to the book every time I was away from it.

I went into this novel expecting a fair amount of brutality. I mean, based on what caused this town to be empty, can you blame me? It ended up being slightly calmer than I expected, but not by a whole lot. So don’t go into this book expecting an easy read.

Having this novel be all about rehabilitating Bennett was an interesting choice. I loved the concept, and honestly, I was looking forward to seeing the mixed community in action. I knew that it wouldn’t be perfect, and I also expected that any problems that came up would likely be the fault of the humans. That seems to be the case a lot, huh?

It was so much fun learning about some of the characters we’ve seen mentioned before, like Barb (Barbara) Debany, Virgil, Toyla, and all the others. Most of these characters were merely mentioned. A couple had a small appearance previously, but that was about it. So it was refreshing to see their part of the world get fleshed out.

A lot of the newer characters introduced were fascinating. Even if, at this point, we had a good understanding of their species. I kept looking forward to all the scenes including Scythe, for example. I thought she was a really interesting character and honestly wouldn’t mind seeing more of her.

Anne Bishop did a good job of building up the tension in this novel. There was always something going on, either to distract the characters or to pit them against one another. It kept things moving forward swiftly. And it obviously made me concerned about the conclusion of this novel. That’s the real reason why I didn’t want to put this book down.

She also did a brilliant job showing the prejudices from all side. I actually feel like she did a better job here than in previous novels. Which is saying something. The humans had reasons to be afraid. Virgil had reasons to hate humans. Jana had a reason to have a bit of a chip on her shoulder. And Toyla had reasons to be frustrated with everybody. It all worked, and it helped to add to the tension. The fact that they all had reasons for their biases helped to show us that there’s so much more going on here than meets the eye.

I’m pretty sad to have already finished Wild Country. I know there probably won’t be another novel for a while since I’m pretty sure that Anne Bishop is now working on the next Black Jewel novel. Not that I’m complaining about that, of course. I do hope that we’ll see another novel in this world at some point. Here’s hoping she hasn’t gotten tired of that world just yet!

I am an avid animal lover, photographer, graphic designer, and much more. I love to create art, and am willing to try any artistic technique at least once. I am particularly fond of artworks involving a lot of emotion and color. The purpose of my blog is for me to be open and honest with myself and the world about my attempts to grow as an artist. My other major passion is reading. My TBR pile is larger than I'll ever be able to read, and yet I can't resist adding to it on a nearly daily basis. I love to read science fiction & fantasy, graphic novels, and pretty much anything I can get my hands on. I have a couple of blogs, as you can see. One is primarily my photography, while the other are my book reviews. If you have any questions, feel free to reach out!
View all posts by Liz (AKA Cat) →
This entry was posted in Fantasy, Uncategorized and tagged Ace, Ace Publishing, Anne Bishop, Book, Book Review, Books, Fantasy, Fiction, Literature, Review, The Others #7, The Others Book 7, The World of the Others #2, Wild Country, Wild Country (The Others #7), Wild Country (The World of the Others #2), Wild Country by Anne Bishop. Bookmark the permalink.