Review: The City in the Middle of the Night by Charlie Jane Anders 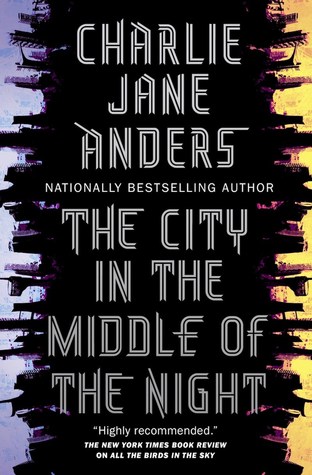 I received a copy of The City in the Middle of the Night in exchange for a fair and honest review.

The City in the Middle of the Night is the newest novel from Charlie Jane Anders. It also happens to be the first novel I’ve read by her. I know, don’t beat me up. I loved it! And I’ve already added all of her previous works to my massive TBR pile, so we’re good.

I’m not ashamed to admit that the first thing that caught my attention about The City in the Middle of the Night was the cover. It’s absolutely beautiful. It seems like every time I look at it I notice another little detail that I had missed previously. Between that and the striking color palette…well, I was sold.

The novel is set on a tidally-locked planet – meaning that the planet doesn’t rotate. Instead, there is one side constantly facing the sun, and the other in complete darkness. There’s a slim slice of land that acts like the equivalent of dawn or dusk. Where the conditions aren’t quite ideal…but they are survivable.

It’s in this small slice of land that humans, the distant relations to the first colonists to flee earth, made their homes. Each city has a different structure, set of rules, and even their own view on life. It may be a strange system, but it works. Mostly.

I almost never draw a quote from the description of a book, but this one is just such a perfect summarization of the novel that I can’t resist: “If you control our sleep, then you can own our dreams…And from there, it’s easy to control our entire lives.”

The City in the Middle of the Night was an utterly enchanting read, from cover to cover. I loved the main character, and many (but not all) of the people she met. I loved the structure of the world, the city, the politics, and many other details. It was all so thoroughly thought out; it was hard to do anything but fall headfirst into the world.

Charlie Jane Anders explores so many different concepts through the course of this novel. It’s almost too difficult to fully take them all in. There’s the perspective on survival; how people would survive on a twisted planet such as this one. There’s the concept of culture; how much or little space a group of people needs before they form their own traditions and way of life. There’s politics; how some cultures moved past the concept of individuals and went for the bigger picture (in their minds, at least). There’s the concept of gender and sexuality; how it’s okay to be yourself, and not be afraid of being different. There’s the concept of self; how much change can a person go through while still maintaining their sense of self. I’ve only just scratched the surface, there’s so much more to this novel. But you have to read it for yourself to see the true depths of it all.

I loved the main character. Her constant self-questioning and determination were really quite beautiful. She’s loyal, accepting, and willing to change her life for the sake of those she loves and respects. I don’t think I’ve ever seen a character quite like her…I don’t want to use the term ‘pure’ but nothing else really fits either. She’s truly open and trusting, possibly in defiance of what she’s gone through.

There was so much I loved about this book, it’s actually taking most of my willpower not to continue babbling about it. I think most of the impact would be better experienced than talked about, for obvious reasons. So I’m going to force myself to stop here.

I think that the novel has the potential to become a series, even if it isn’t currently listed as one. While this novel did fully wrap up most of the plots, there are still a few points left open. I suspect that’s in hopes of a second (or more) novel, which I’m fully in support of. I’d love to see more of the planet and how things fall out in the long run.

I am an avid animal lover, photographer, reader, and much more. While my photography blog is feeling a bit neglected at the moment, the other sites I'm involved in are going strong. ✧I review books, comics, and basically anything else in the literary world over at Quirky Cat's Fat Stacks (of Books). ✧I review comics and books, as well as write content for Word of the Nerd. ✧I review comics for Monkeys Fighting Robots. ✧I write content for Screen Rant and CBR. ✧I write book reviews for The Review Crew.
View all posts by Liz (AKA Cat) →
This entry was posted in Fantasy, Uncategorized and tagged Book, Book Review, Books, Charlie Jane Anders, Fantasy, Fiction, Literature, Review, The City in the Middle of the Night, The City in the Middle of the Night by Charlie Jane Anders, Tor, Tor Publishing. Bookmark the permalink.